Continuing our consumer debt series, and today we’ll take a look at how interest rates play into things. So lets jump right in and start with interest rates and bankruptcies. 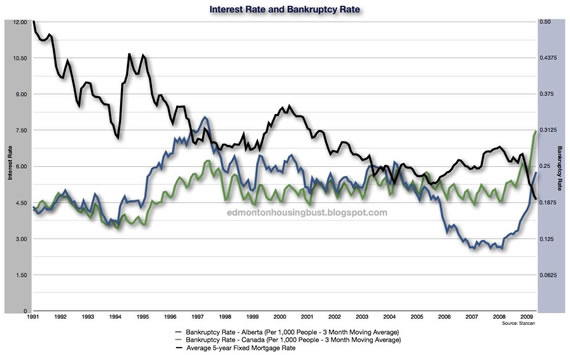 It’s hard to say if, or how much, of a causal relationship may exist between these happenings, but as we discussed in my last post, people are increasingly likely to default on loans early in their terms, particularly when the rates charged are high. So the rise in bankruptcy rate could be a remnant of people taking on debt during the interest rate spike… or it could be nothing. Worth noting anyway. 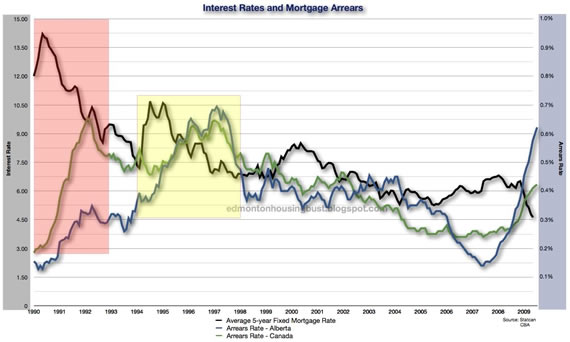 Moving on, now we’ll hit on interest rates and mortgage arrears. This data goes back one more year, and here we can see there was an additional spike in interest rates in 1991… and like the bankruptcy rate, we can again see an arrears spike lagging, and topping out about two years after the interest rates did.

Again this could be a coincidence, but such a relationship would seem rather intuitive and seems to show abrupt interest rate spikes may contribute to later spikes in loan defaults. The slow decline of interest rates don’t appear to have a major effect, but rapid increases do seem to be a noticeable driver.

So, obviously in our current low rate environment this could spell trouble ahead as rates are almost assuredly to rise at least back to more historical norms. That graph is also another reminder of just how historical norms have been and how fortunate borrowers have had it for the last decade. 7.5% appears quite moderate over the last 20 years (and if we went back 30 it would look even better), but if we suddenly found ourselves in that situation tomorrow, havoc would be wreaked, and not just on the real estate market. 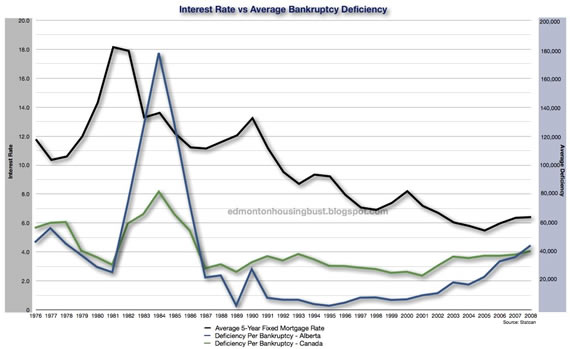 Finally, cause I have the data and went to the trouble of making the graph, we’ll take a look at interest rates and average bankruptcy deficiency We hit on this last week, but for a quick and dirty explanation, deficiency is the surplus of liabilities over assets upon filing for bankruptcy.

This data goes back much further, all the way to 1976 and the series was annual. Obviously what catches everyone’s eye is the big spike there in the early 80′s. Seems there were a whole lot of bankruptcies that included foreclosures during that spike, especially in Alberta.

Beyond that period there doesn’t appear to be as much a relationship between the measures as the ones we’ve discussed earlier. But as I discussed last week, most of the time the majority of bankruptcies do not include foreclosures, so that isn’t surprising. While we don’t have foreclosure numbers going back to the early 80′s, the deficiency measure would seem to indicate there were a whole lot of them.

Anyway, hope you guys found this interesting, a little macroeconomic food-for-though to chew on this weekend. Take it for what it’s worth.