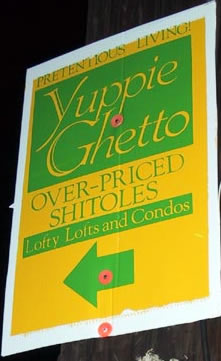 Some of you may recall my writing about the situation of a couple friends of mine two months back. Figured I should do an update with Spring fast approaching and all.

Anyway, now it’s been five months, four price drops, one re-listing and they still can’t even get so much as a low-ball offer on their place. Then again, winter does not do this already awful location any favours… off a loop, off a loop, off yet another loop on a hill no less… THEN down a long narrow alley.

It’s no joy to drive to this place at the best of times, but when there is snow, forget about it. The already narrow roads are that much narrower with the snowbanks which are never cleared since that’s the only place people can park, then add packed snow and ice to the mix. You get the picture… and as I described the place in the first entry…

… frankly their townhouse isn’t all that desirable. It’s in one of those developments where everyone is practically on top of each other, poorly and cheaply built, no view of anything other then the next buildings on either side, and a “yard” that is smaller then my Volkswagen. It’s the kind of yuppie ghetto that will pockmark the city and eventually become de facto low income housing, a sad reminder of the housing boom and bust.

They’ve now dropped their price to $260K, which if that was what they started at back in October they may have had a punchers chance, but now they’re just riding the market further down. They’re priced in the ballpark with the other listings in the area, but none of them are selling either and most are offering at least an extra bathroom, if not a bedroom… so even if there is a greater fool or two floating around they are not going to catch them.

It’s not like nothing in the city is selling. Sure sales are way down, but every week I peruse the new listings and make note of those that are well priced for the market… and if they look decent and are priced about 10-15% below the comparables, they sell, often within a month even.

So there is hope, and I imagine if they’d bite the bullet and drop their price down to $230K, they could probably sell it quick for close to asking. I guess it’s hard to imagine just giving away thirty grand out of your back pocket, which would effectively be what slashing their price like that would be doing… of course they’ve effectively already done it once with all the token cuts over the last five months.

Trouble is that it’s just a matter of time before someone in their complex does it themselves and at that point the bar is reset that low for everyone, and then they’d have to come in below the new standard to get a sale. It might hurt the ego in the short term, but in situations like this the first mover often ends up the best off for it.

They still are in an equity position to do it too, they paid $200K for it, and while their equity still isn’t enough to cover their realtors commission, they can still make a solid 10% profit… which isn’t bad considering they’ve only held it for about two years. Anywhere but in a bubble that’s a very solid return on real estate.

They’re holding out hope Spring will be their saviour. I don’t think they’re the only ones.

Problem is they’re still no where near market value, and not only is the market prices going down by $100-$200 everyday, but they’re still having to go out of pocket for all the carrying costs on a house no one is living in.

In the five months it’s been on the market they’ve paid over $8,000 in mortgage, strata and taxes… only of which about $1,300 ended up being equity. And that’s not even mentioning the utility costs, none of which are covered in their strata fee… then there are the unquantifiable, like the mental and emotional stress the situation has caused.

So they’re out of pocket several thousand dollars, five months of their lives, and are still no closer to getting rid of the place. Perhaps the ultimate irony is they’re paying all these expenses based on the expectation of getting their price… when in reality they’re just doubling up on their losses as it’s a declining market and the longer they holdout, the less they’ll ultimately get.

It’s not just the selling costs one must consider when trying to sell their home, but the carrying costs… especially when it’s sitting vacant.