Hope you all enjoyed your long weekend. If it was anything like mine, it was likely full of sun and way too much refined sugar.

If you’ve been reading the releases coming from the various real estate associations, you may have noticed they are now talking up the month-over-month sales and price figures more so then they have in the past.

Traditionally they usually focused on year-over-year figures… but as those are coming in as declines as of late, they are referencing those less and less. Something of a marketing move, as they’re in the business of stimulating sales, and hearing about prices and sales going down doesn’t make their message very receptive to buyers or sellers.

As a result of this, it’s also increasingly being pointed out that month-over-month gains are actually normal in the spring, as real estate for whatever reason has a lot of seasonality. So today I’m going to take a quick look at the traditional seasonal movements of prices, sales and inventory. 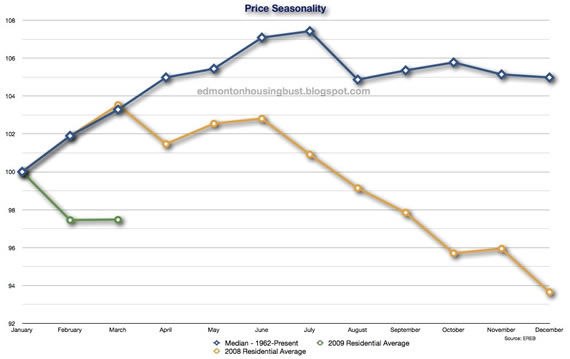 Here we see how prices typically move through the year. The blue line is the historical trend, and as you can see it usually shoots up about 7% in the first half of the year before leveling off, then drops off a couple points in the summer, and ends the year up about 5%.

We can also see that over the last year we’ve severely deviated from the norm. In 2008 it tracked normally through March, then fell off slightly through spring and then really dove throughout the second half… and 2009 thus far has been an extension of that. 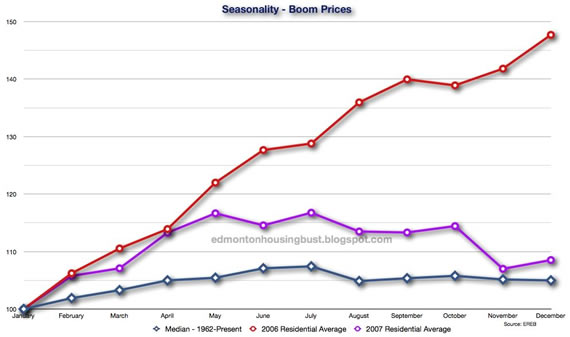 Here’s a look at how prices behaved during the boom relative to historical norms. In this case normal seasonality barely registers as a speed bump, and while the boom was on through mid 2007, normal seasonality was no predictor what-so-ever. Which has also been true thus far in the bust.

Basically, seasonality is no indicator of prices during a bubble. That said, it is noticable that during the downturn, spring still does appear to be the strongest period, and falls off from there. Which seems to indicate the second half of 2009 could witness a very big decline. 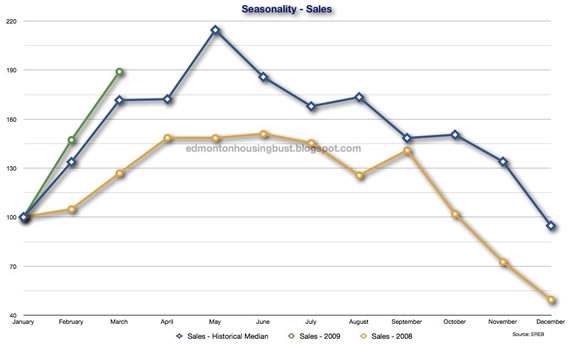 Here we look at sales. Similar pattern, but in much larger proportions. Sales continually improve through May (typically more then doubling the January tallies), then going back down the rest of the year.

In 2008 we can see that it tracked a closer pattern in sales then prices. This also holds true though the boom, so while the scales may change, the general seasonal pattern remains.

It’s also notable that 2009 appears to be gaining very strongly, but this may be more of a result of an overly poor January. Again though, it is tracking quite closely to the historical seasonality. 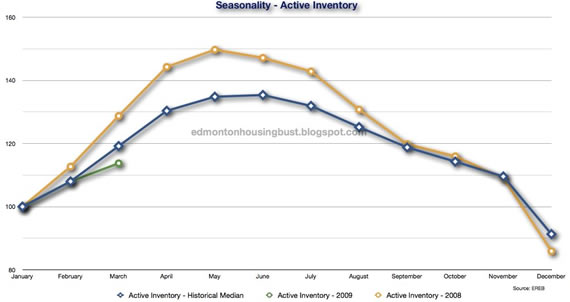 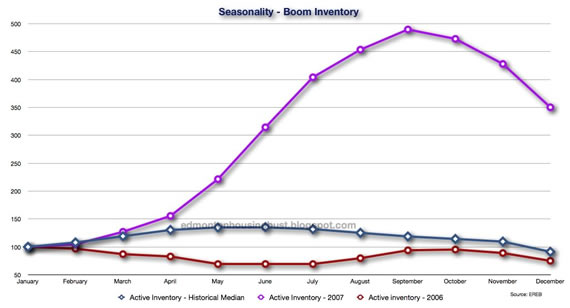 On the other hand, during the the boom, and the onset of the bust it looked quite different. In 2006 inventory actually tracked the opposite pattern, and declined through to the summer. This obviously caused a inbalance of supply and demand, and really fed the skyrocketing of prices.

Then in 2007 it was a very different story when inventory tracked normally, then picked up, then did some skyrocketing of its own. Which then caused a glut of inventory, and halted then reversed prices. Obviously a very volatile period there in 2006 and 2007.

So, as we can see, we should not be surprised by sales increasing in the spring, and the real estate boards out there should enjoy trumpting month-over-month gains while they can, cause come summer they’re going to have to find something else as both month-over-month and year-over-year figures will be poor.

As for some April predictions, I’ve been working on some different models but they’re hardly perfect… but I’m a glutton for punishment, so lets throw out some numbers and see how I do.

As mentioned before during a bubble prices are kind of anyones guess, but I imagine they’ll hold their prices in April. Active Inventory I’m going to say will end April around 7,900. Sales I’m going to peg at about 1,700 for April.

Though that could be a ways off, on one of the local agent blogs they are citing the EREB claiming 574 sales already this month, which by my calculations would put us on pace for almost 1,800 on the month (there were 1,830 last April)… though in the paragraph prior they talk about how much things have slowed sales wise and gave quite a low tally for the week.

So, in conclusion… who knows?! Time will tell.