Are agents feeling the pinch?

So tomorrow is Friday the 13th… and if that doesn’t scare you, just wait until the Feds announce the latest employment numbers tomorrow. Very ouch, I’m sure.

Today I’m going to take a quick look at an angle of the real estate industry that doesn’t often get much attention from we outsiders… the agents and their commissions.

Oh sure, many may curse them out for whatever reason, some think the commissions are too high, or don’t like that the buyer is represented by someone with a vested interest in a higher price, or find it odd that they trademarked their job title and insist it be capitalized.

I don’t know, I always just kind of figured it is what it is, but the capitalization thing seems kind of pretentious… but I guess you have to have some way of distinguishing REALTORS® from, say, Sandwich Artists®.

Whatever, I’m not going to get into all that. What I’m going to look at is how the bubble has effected their industry from an overall personnel and revenue perspective.

One interesting little nugget in the monthly  press release that most probably overlook is their little blurb at the bottom. This month it reads:

The REALTORS® Association of Edmonton (Edmonton Real Estate Board), founded in 1927, is a professional association of 3,148 Brokers and Associates in the greater Edmonton area. The Association administers the Multiple Listing Service®, provides professional education to its members and enforces a strict Code of Ethics and Standards of Business Practice. The Association also advertises property listings and publishes consumer information on the Internet at REALTOR.ca (formerly mls.ca), as well as in the Real Estate Weekly and on their web site at rewedmonton.ca. The Association supports charities involving shelter and the homeless through the REALTORS® Community Foundation (RCF).

While at first glance it looks like just another disclaimer, or some small print… it actually includes a kind of interesting little factoid, that there are 3,148 agents in the city. They’ve been including that for several years now, and while it occasionally is a rounded figure, or blatantly copy and pasted from a prior years draft without bothering to update the tally, it gives a ballpark figure and when compiled actually reveals some interesting stuff. 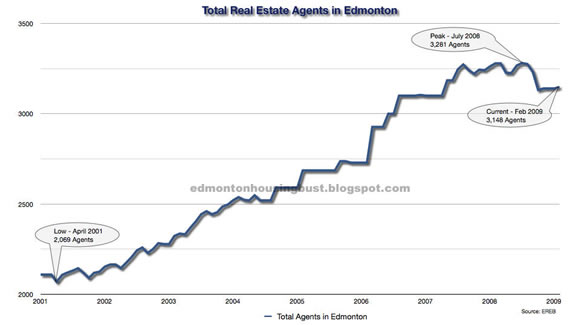 Here we see that their ranks swelled in recent years. No surprise there. Between ’01 and ’08 their numbers grew by over 1,200 bodies, or about 59%. Also no surprise that with the market cooling we’ve seen a few leave recently, 133 to date according to their figures.

It is interesting to note that their membership was growing quite steadily even before the bubble really got going, and while it certainly picked up come ’06 and ’07, there actually wasn’t an explosion of new recruits.

From this data we can derive all sorts of (perhaps) interesting little figures when comparing it with their other stats. 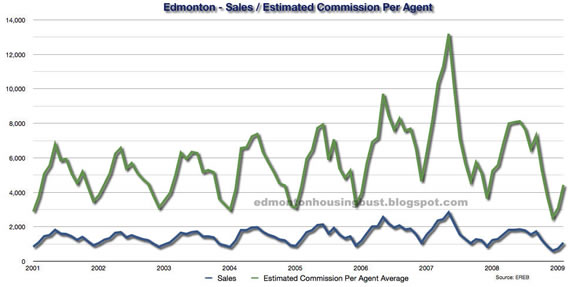 And for those curious, no I didn’t just simply just calculate the commission by using the 7%/3% formula on that months average price, as sales <$100,000 would skew such numbers. I actually ran the numbers through about a dozen different calculations to account for sales by price range, et al in an effort to account for all the different variables. So while this number is not exact, I think it is a very good estimate. After all, ultimately there is no way of knowing the exact number without knowing the specifics of every transaction since there are instances of reduced commissions, etc. While that graph gives an excellent example of seasonality, and shows an overall trend reminiscent of the bubble, it doesn’t really offer a relatable finding for those of us outside the industry. So for that, we’ll use this chart.

This is a moving average of the estimated accumulated commissions an agent would earn over one year. As you can see, this one definitely does reflect the housing bubble.

Bear in mind, this is not before tax income. They have to pay all their expenses out of that… vehicle, gas, cell phone, incidentals, and then there is the multitude of memberships fees and licences they have to pay to their brokerage and organizations like the EREB, AREA, and CREA.

This is also just an “average” and there is a whole lot of range of income in that profession. The Terry Paranych‘s of the world are still going to be making obscene amounts of money, though perhaps not as obscene as in 2007… while many that just went into that line of work in the last couple years or are part-timers, and haven’t really established themselves, are really going to be seeing a difference and feeling the downturn.

Those newcomers will also quite likely be the first ones to leave and find other lines of work. Which will provide something of a necessary purging of excess agents.

Those in the middle, which make up the majority, should be able to weather the storm. Though their support staffs will likely get cut back from their peak levels, this is also necessary since the work level just isn’t there to justify them.

As far as things have fallen in the last two years, the commission per agent figure is still at almost $70,000. A very healthy level when looked at from a long term perspective. So while things certainly aren’t as good as they were in 2007, they still appear pretty good on the whole.

So for those established agents out there I wouldn’t think they’re feeling the pinch just yet.

That could of course change. If over the remainder of 2009 sales remain about 20% lower then 2008 and the number of agents stays the same, even if prices don’t go down any further… by December that commission per agent figure will drop to ~$55,000, which would be lower then it had been anytime in the least eight years.

So if this sales slump continues through ’09, we’ll start seeing agents getting very antsy… and if it continues into, if not through, 2010, I imagine we’ll see a fairly significant thinning of the ranks. But for now, I think it’s mainly just the part-timers and the johnny-come-lately’s that are feeling the pinch.