I had been wanting to do this for while, but could never find a solid set of data regarding historical incomes in Edmonton… but late last night I finally stumbled upon a Statcan report that was my dream come true.

So today I’m going to take a look at incomes, interest rates and prices over the last 30 or so years here in Edmonton. This may get a bit long and be a bit graph heavy, but their are a lot of different angles to look at, but I’m going to try to narrow things down as best as possible.

To get things rolling lets take a look at this graph (like all the graphs, you can click on the image to get a view of a larger version).

Here we see the median and average economic family incomes for Edmonton from 1976 through 2006 in nominal dollars. A fairly steady, gentle curve up as time goes on. We’ll also note the average always is proportionately higher then the median, but that they track very similar patterns. As I’ve mentioned before, I think median is the more reflective stat, so we’ll be using it rather then the average.

It’s striking how relatively flat earnings have been over the last 30 years. It’s also interesting to note this chart picks up in 1976, during the run up of the last big housing boom in Edmonton (as discussed in this entry) and ends in 2006, effectively the run up of the current boom. 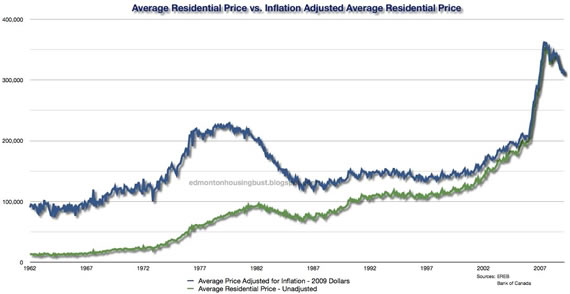 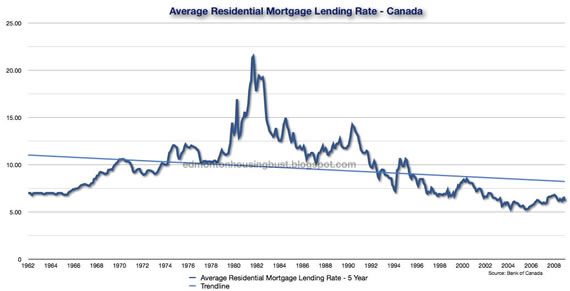 This graph shows the values of average interest rates on mortgages (5 year terms) in Canada since 1962. As you can see, they have been very volatile and have a huge range. We can also see that historically we’re currently at very low levels… even lower still when you consider todays rates are not represented in the graph (though it is worth noting that in the early-60′s, rates then were in around 7%).

To get back to the earlier question of why we can afford to pay more for homes when earning effectively earning the same income… it’s because interest rates are historically low. As you can see from the graph we’re well below the long term trendline, and have been to varying degrees for most of the last 15 years.

It’s also interesting to note the contrast of interest rates during the last housing bubble to the current one. The last one saw prices increase then hold from about ’73 to ’81… a period when interest rates were climbing. Significantly. Rates were already trending up leading into it, then went from about 10% in ’73 to as high as 22% in ’81.

Now that we have the interest rates and the prices, we can figure out what income it would take to qualify for a conventional mortgage (25 year amortization) using the 32% Gross Debt Service Ratio (but ignoring taxes and heating costs, so effectively people would actually have to earn more, but for the purposes of this example they’re ignored).

This is unadjusted for inflation. We can clearly see the two bubbles, when the income required for financing blows WAY past the median family income of the city. This was also for Single-Family Homes, the same graph for residential average can be viewed here.

It’s interesting that both bubbles appear roughly similar in that graph, but when we adjust for inflation…

Suddenly that boom in the late 70′s-early 80′s looks massive…. and that big spike it almost entirely due to the staggering increase in interest rates, as prices relative to inflation had largely plateaued from ’76 to ’81. Rising interest kept putting more and more downward pressure on prices, and eventually prices gave as affordability disappeared.

In any case, as we can see, eventually prices got back in line with earnings (interest rates coming down also contributing to that) and stayed relatively close for about 20 years or so… until the current bubble took off. It should be noted, the income data is not as current as the real estate prices, hence they cut out two years early.

Another factor to take a quite look at is interest rates and inflation rates… here is a little graph of that (these are yearly averages unlike the earlier graph of interest rates, which were monthly).

Not surprisingly, they track together. Like interest rates were much higher during the last boom, so was inflation. This revelation also reveals that lowering interest rates would have cushioned the fall during the last bust… so even if you overpaid at least you’re going to see your payments decrease in the future and inflation would be bringing up incomes thus improving affordability at higher prices. This is in stark contrast to where we find ourselves now when the prime rate is already effectively at rock bottom and inflation is minimal if not negative.

Since the 90′s economic policies have been trying to minimize inflation, trying to keep it 1-2% a year when possible… contrast this to the last bubble when inflation was anywhere from 6-12% annually. So, while inflation could go back up to those levels, it would also cause interest rates to go up and these effects would largely offset each other.

Which begs the question, what happens this time?

It’s a good question… because prices are still out of line, interest rates are effectively as low as they can go and inflation currently is negligible (and some are even speculating we may see some deflation)… in this situation, prices are the only thing that can give.

Even in the event of inflation because of all the printing of money, interest rates will inevitably also increase… which will still leave prices as needing to make up most of the difference and financially destroy most who bought during the boom when their mortgage comes up for renewal or are on variable rate. It seems there is going to be no cushion for falling home prices as they get back in line with earnings.

Ultimately it’s really hard to say what’s exactly going to happen in the long run, other then eventually prices and incomes will get back in line… how, is anyones guess, because the global financial crisis largely being uncharted waters.

In the short term though, real estate prices only appear to have one way to go. Down.