A few months back I touched on price ranges/sales mix, and as the last quarterly number just came out I figured it would be a good time to revisit the subject and see what is selling and how it’s changing. 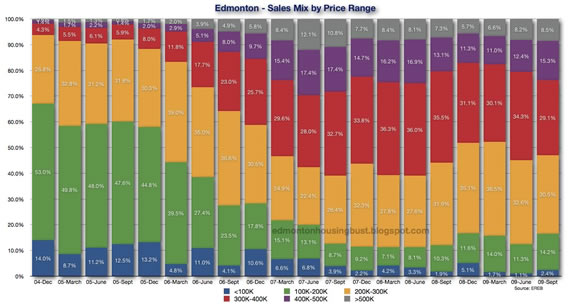 Like the last time around, this measure is of the proportion of sales any price range accounts for, so makes no differentiation for how many are sold.

It’s interesting to note the change from the June ’09 numbers September ’09 (these are of monthly tallies, not quarterly, though I will try to do those one day). We’re seeing an increase in activity at the extremes of the market (<200K and >400K), and shrinking in the middle.

While shifts in market are not unusual, which the chart nicely shows… what is curious is how both extremes are showing increases. Typically you’d expect it be one or the other.

Obviously in the last six months in particular we’ve seen a drastic change in interest rates, which has a massive effect on housing prices. This could explain the strength in the 400K+ ranges, as long as rates are low it greatly increases the amount a person is capable of qualifying to finance. Those looking to buy can get a lot more house for the same monthly payment.

What is more unexpected was the increase at the low end, back to the levels seen in the fall/winter. As I’m previously hypothesized I suspect this could be a signal of the return of speculators to the market, as they largely operate in the lower price ranges.

As per what the future holds, that’s still anyone’s guess as it seems more then ever the financial world is a complete crap shoot… and things will only get more rocky if the governments of the world turn the stimulus taps off, and the true effects of the downturn are felt.

About the only thing that is a general consensus is that it’s going to take years to sort out.