Greetings freaks and geeks, hope you’re all ready for the long weekend. Before you go, here is the affordability update I promised.

As you may have noticed, suddenly this spring the word ‘affordability’ magically returned to the lexicon of the real estate pumper. A word nary whispered a year ago, but suddenly it’s convenient again. The improved affordability is obviously a result of the historically low interest rates… as the other two variables, incomes and prices, haven’t done anything to improve the equation.

To get a gauge of how interest rates stack up versus how they have in the past here is a graph of the average 5-year fixed rate taken out through May.

As we can see, this is the first time we’ve dipped below 5% (4.62% as of May). Obviously not as low as some of the advertised rates the were circulating at the time, but it should remembered that those were not available to everyone, mainly just prime new borrowers, those renewing/renegotiating were often shit outta luck.

Also interesting to note just how rare it is that rates are under 6%. Even since monetary policies started targeting inflation to 2% in 1992, rates didn’t hit that level until 2003 until after the big shift post-9/11 and many nations lowered their inflation targets to 1%.

In any case, when combining the lower rates with the stripping of mortgage qualifying standards by the federal government in 2006 (over the course of that year borrowers went from needed 10% down and limited to 25 year amortizations, to 0% down/40 year amortization and 10 years of interest only payments), it’s not hard to see that it created something of the perfect storm for the price explosion we witnessed.

Here is a graph of the income needed to qualify for financing to buy the median single-family home in Edmonton, charted with the median household income in the city. This is using the 32% gross debt service ratio, 10% down and using $170 per month in taxes and $100 in heating.

I took a sampling of 20 homes listed at/near $349,500 (the median SFH price), and they had an average and median annual property tax of $2050, which is roughly $170 per month, and the heating number at $100 may be a bit low, but for the pumpers sake we’ll use it just so I can’t be accused of skewing the numbers, maybe assume you have a ton of insulation and a helluva efficient furnace.

As we can see, there has been a major improvement in affordability, though it’s still a bit above the latest income figures (2007), which considering how 2008 ended and 2009 has played out, it’s probably safe to say they aren’t haven’t gotten much if any higher (and quite probably have started going down).

Of course, from what we’re hearing 10% down and 25 year amortizations are concepts rarely grasped in real estate now-a-days. Recent surveys have been telling us that the average downpayment is a mere 6%, even amoungst those already in the market, and the vast majority of amortizations are of the 30 or 35 year variety.

Recalculating assuming 35 year amortization and 10%, and only then do we truely near something resembling affordability… again, that’s assuming 10%, which evidently very few already in the market can even muster, much less the coveted first-time buyers.

But compared to what we witnessed the prior three years, any semblance of affordability seems like a dream come true. The market was correcting price wise by itself though last fall, but since then the trouble is that it’s interest rates doing all the work, and few expect them to remain all these record low levels. 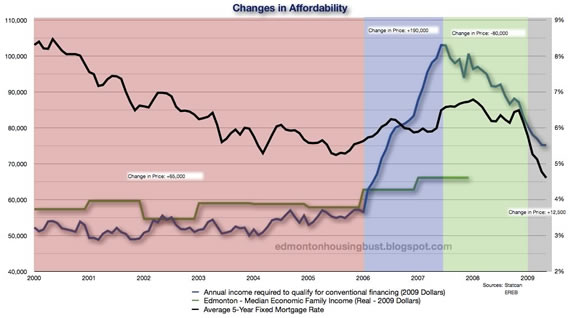 Recalculting affordability at current incomes and even 6% interest and affordability is again a thing of the past. Figuring in 25 year amortizations and 10% down, at 6% interest that would suggest the median home in Edmonton is overpriced by about $80,000… at 7% over $100,000… at 8% $120,000. You get the picture.

And do not think those interest rates are unrealistic, with governments running up massive deficits currently, they’re going to be flooding the bond market, forcing prices down and thus yields up… which we know, drives up borrowing rates. The ugly truth is rates even hitting the double digits isn’t out of the question.

Then compare that to the long term trend in incomes, which for 30 years hovered in the mid-50,000′s and only recently has broken well into the $60,000′s. Even if incomes managed to continue climbing, those gains don’t come overnight, and a return of even modest interest rates would still destroy any illusion of affordability and again leave prices to make up the difference.

Double disturbing in light of that people are coming in with increasing small down payments and longer amortizations. This just leaves them with negligible equity, and as a result even small decreases in prices leave increasing numbers of recent buyers underwater.

And for those thinking inflation might save you, take a look at that first graph and ponder the interest rates witnessed in the 70′s, 80′s and early 90′s… those are what comes with inflation, interest rates will kill you long before inflation will come riding in on its white horse.