Boom and bust… the rise and fall of ComFree?

Private sales, or For-Sale-By-Owner (FSBO for short) have been around for as long as there has been something to sell. Though in real estate private sales kind of fell out of favour as sales people and agencies became specialized and by pooling resources started offering levels of exposure that private sellers couldn’t match.

With the emergence of the internet though, the game changed. As more and more people were going online for information, conventional media advertising was no longer the only game in town.

The establishment soon started adjusting to this by bringing the MLS online, but a major barrier to entry had been removed as the costs of operating online were far lower then buying advertising in the conventional media. Now a person with a little bit of html know-how could effectively showcase their property in detail they never could before.

It also paved the way for new entrants to come in and unite the traditionally highly fractional private sellers, and offer a low cost do-it-yourself service alternative to selling through a realtor. Here in Edmonton we’ve seen the emergence of ComFree.

ComFree actually started in 1996 in Winnipeg, six years later they made their first major expansion coming to Edmonton in the fall of 2002. They’ve since established themselves throughout the rest of Alberta and much of BC, as well as Australia. They basically carved themselves out a niche by offering sellers the basic tools to complete a sale and exposure on their website, for a flat rate that is a fraction of what one would pay a realtor in commission.

It’s a fairly basic but effective business plan, very low overhead, everything is very standardized. The seller pays their money, ComFree gives them their package and from there the onus is on the seller. Their only real significant costs is marketing, as staffing and website costs would be very basic.

This model worked out quite well, they were largely the first mover in the market and established themselves quickly. They were also fortuitous in that from 2002 onward, the real estate market kept picking up momentum. By 2004/2005 the market was on fire, and 2006/2007 was just ridiculous… and ComFree was enjoying the ride.

In the spring/summer of 2006 they were averaging about 450 sales a month, and tallied 4,375 for the year. If you combined MLS and ComFree sales, ComFree had a 16.6% marketshare for the year for sales.

Like the rest of the resale market, ComFree stayed hot through the first half of 2007, raking up over 500 sales a month from March through May, topping out at 556 (May). In the first half of the year they had 17% market share. 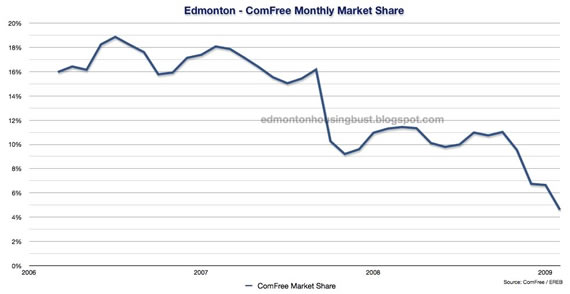 Then the music stopped… and as hard as it hit MLS, it hit Comfree even harder. For the second half of ’07 their market share dropped to 12.9%… for ’08 it was just 10.5%, and where a year earlier they were setting records with spring sales of over 500 a month, they were now only managing about 200. It’s only gotten worse in ’09, with just 241 sales through April… a mere 4.6% of the resale market.

Like the MLS, ComFree has witnessed an erosion of prices, and explosion of inventory… in December of ’07 they had an absorption rate of over 33, with an inventory of 3,026 to just 91 sales. 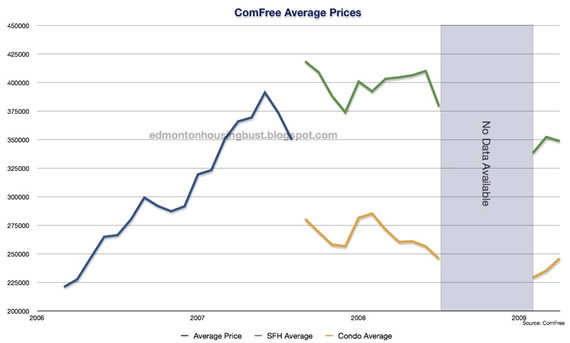 So why has ComFree wilted so much worse then MLS? There are several reasons, but I think it mainly comes down to exposure, and service. In a hot market, homes were selling themselves, buyers were clamouring for more so they were actively seeking listings, they’re beating a path to the sellers door.

Then the frenzy ended… now suddenly, ComFree isn’t as effective and is losing market share rapidly. We’re in a stage where homes need all the exposure they can get because there is a massive glut of inventory, buyers are no longer biting on the “buy now of get priced out forever” line, and the speculators haven’t just disappeared, but now are trying to unload their own flips gone wrong.

Before you could pretty much slap a price tag on anything, hold an open house and welcome the bidding war. Now you actually have to show the place, likely several times. As much as most feel commissions are too high, it’s situations like this where it’s a lot less hassle to go through an agent. Buyers can just submit a list and let the agent schedule all the showings.

With ComFree the buyer has to do the legwork themselves and deal with the seller directly… which speaking from personal experience, is something of a pain in the ass. I know when I was looking at places last summer, I tried to look at a few ComFree listings and it was a nightmare or phone tag, last minutes cancellations… and these were the ones nice enough to actually return my calls.

And often from the buyers perspective the prices really aren’t any better then the MLS listings, it’s just the seller is pocketing the difference rather then paying a commission.

Obviously there is no need for a toe-tag with ComFrees name on it, largely because they have very low fixed costs. They make their money by getting people to list, not on the sale itself (though, more sales would certainly help them get more listings via word of mouth). Their only real cost is marketing, and can likely rest on their laurels for awhile if need be. So they’re probably doing just fine.

The real issue with FSBO at this time is for the seller. Services like this would be quite effective in a hot market… but in cool to balanced ones, it’s a tough row to hoe. I don’t want this to sound like an advertisement for realtors either, but I think I’ve gotten in my fair share of licks on them already, and pride myself as little if not an equal opportunity detractor.