Of bonds, banks and mortgages

By: Aaron Sims
In: Canada, Mortgages

TUESDAY UPDATE: Reports are circulating TD is about to raise their 5-year fixed rates another 0.4%

We’ve been hearing lots about central bank rates being at historic lows, and it’s influence over mortgage rates… but anyone following my Twitter feed the last while has no doubt noticed my little obsession with the bond market.

While on the surface there doesn’t seem to be much reason for a site like mine to concern itself with such things, but in fact the bond market is very influential on mortgage rates, and thus has a very big effect on the real estate market.

Mortgages themselves are essentially bonds, in exchange for the banks money, the buyer agrees to pay it back over a specific time at a specific interest rate. The bond and mortgage back securities markets are closely tied, and thus so are mortgage rates (which are usually slightly higher then bond rates).

So today I’m going to take a look at the relationships between bond yields, bank rates and mortgage rates. Here is a look at these rates since 1981. 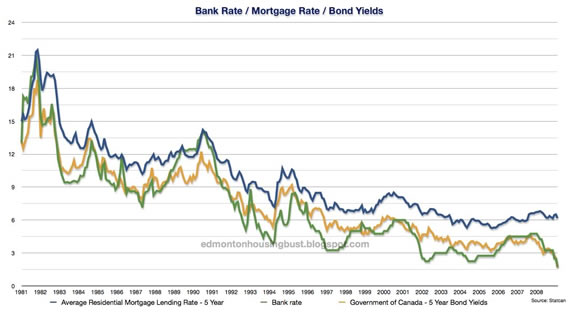 As we can see, all three tend to track quite similarly. Also of note, mortgage rates are usually the highest of the three. For the sake of this post we’re going to be using Government of Canada 5 Year Bond Yields, and the average lending rate for 5-year fixed mortgages (as they are the most popular here in Canada).

We’ve been hearing lots of late about how Mark Carney has been pledging to keep the Bank of Canada’s key policy rate at 0.25% until next June. Which from the trendline equation would suggest a mortgage rate of about 3.25%, which was never quite realized as 5-year fixed rates never got much lower then 3.95%, but that is certainly within the expected range.

The issue though is that even despite the assurance that the bank rate will not change, mortgage rates have started to creep up, advertised rates went up to 4.15% last week with suspicion it could be headed higher shortly… why is this? Well, the simple answer is we’ve been seeing a lot of upward movement in the bond market (and a huge jump in US T-Notes).

So while the bank rate may not change, if the bond yields rise it would appear that we should expect mortgage rates to rise as well. Especially since at this point the bank rate is being intentionally depressed, thus a short term decoupling would not be unexpected as the other two are still largely at the will of market forces.

Finally, we’ll do a scatter plot for bank rates and bond yields. The relationship of these two appear to be very similar to that the bank rate and mortgage yields, complete with a similar R2 value of 0.9046. Which is again a very strong relationship in its own right, but not as significant as bonds and mortgage rates share.

So, while the bank rate is expected to stay low for the foreseeable future (though we are hearing increasing reports that it will be heading up by year end, well before next June as initially promised), that is no promise that mortgage rates will stay down. For a better idea of where mortgages are headed, keep a close eye on the U.S. Treasury Note market, and Bank of Canada bonds (though they largely follow T-Notes).

If bond yields continue to rise, mortgages will follow. Which in turn will force the governments hands when it comes to quantitative easing (which is aimed at keeping bonds and financing rates down, but is intensely disliked by most debt holders).