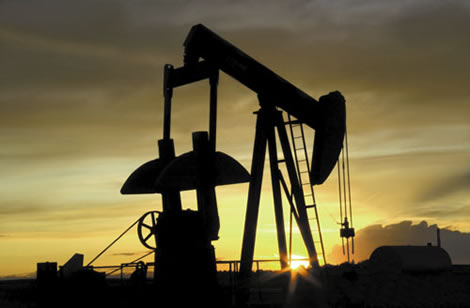 One of our frequent commenters, Two-Thirds, offered up a couple local real estate folklore that he’d like to see tackled… his wish being my command, here is the first, the relationship between oil prices and real estate prices in Edmonton. 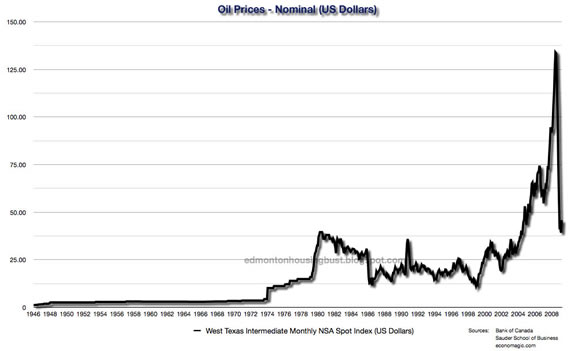 Those that have been reading this blog for awhile have already seen graphs of Edmonton’s historical prices several times, so we’ll start with a look at historical oil prices instead. For this post I’ll be using a spot index of West Texas Intermediate Crude… that seems to be the most commonly cited oil price, so should be a good standard. 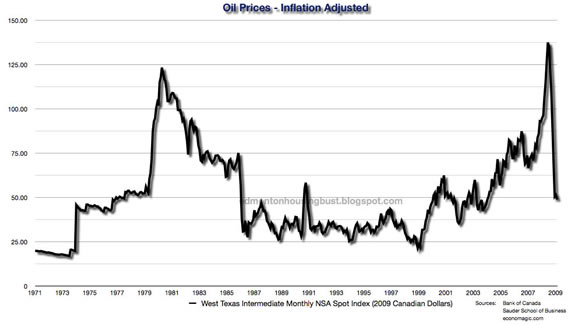 To give you a better idea of the prices, here is the inflation adjusted price, and in Canadian dollars. As you can see from the graph, oil prices can be pretty volatile and undergo some very big swings, quickly.

It only goes back to 1971, this is because that is as far back as I could obtain exchange rates for… but that’s okay, since as you can see from the prior graph, prices were pretty much stagnant before the ’73 Oil Crisis, and Edmonton house prices were also pretty stable up to that point anyway.

It’s also good because creating these graphs over such long periods makes my year old iMac behave like a 486 trying to run Quake. 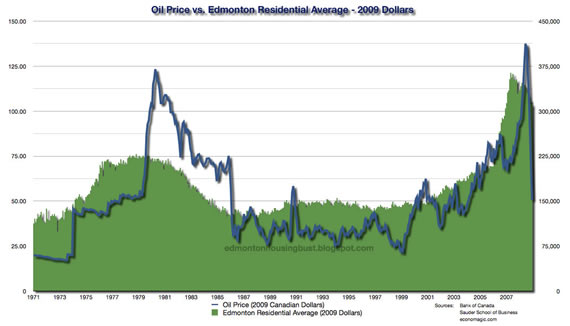 Now here is a look at how oil prices chart against Edmonton’s residential average price going back to 1971. We can see they have somewhat similar patterns, but it doesn’t appear that Edmonton’s real estate prices are nearly as reactive to oil prices as some may think. It is hard to say though, as real estate is something of a lagging market, not nearly as reactive as the oil market.

Realistically it takes time for the benefits of higher oil prices to makes its way through the economy. It takes months, if not years, for new projects to get off the ground, and the money from that to circulate.

So, when looking at the first boom in the 70′s, it could be argued that the rise in prices was, at least in part, due to the big spike in oil prices in January 1974. That delayed reaction could also explain why there was no apparent effect on real estate prices after the further spike in ’80 when prices briefly eclipsed $120/barrel (2009 dollars) then started shooting back down.

To counter that though, we can also see that real estate prices were declining during a period when oil prices, while dropping, were still well above what they were in the mid 70′s when they may have triggered the boom. Of course there were external factors at play at that time, like the NEP, which effect would be extremely difficult to quantify.

Then there is the big drop around 1986 when the price of oil plunged over 60%, and stayed there… while real estate prices seemed to have no effect, delayed or otherwise.

So, what’s it all mean? Hard to say, I guess one can see in those graphs what they wish.

To take a more statistical approach, we can take a look at the correlation between the two… this actually yields a seemingly remarkable result… a positive correlation of 0.68 since 1971. Anyone familiar with the measure knows that actually indicates a significant relationship.

But there could be many different factors at play, so to get an idea of what kind of correlation is normal I decided to also run the numbers against a control city that isn’t generally associated with oil and therefore one would not expect to find such a correlation… in this case, Toronto.

I only have the full numbers for Toronto going back to 1995, so to compare apples-to-apples as best as possible, I re-ran the number for Edmonton over the same period. Here are the graphs of those. 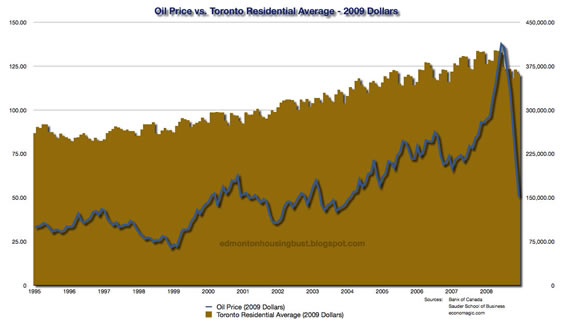 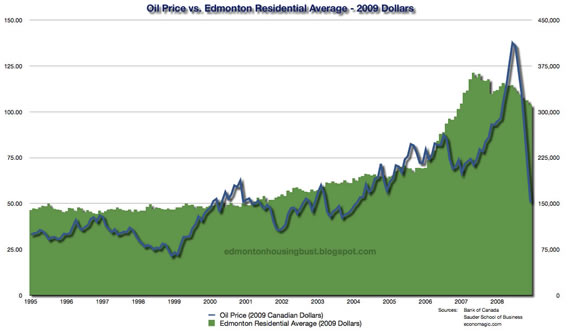 If you were shocked by the high correlation between Edmonton prices and oil prices earlier, you haven’t seen anything yet. Edmonton from 1995 to now is an astounding 0.87. Seems like that would make the relationship a slam dunk!

Not quite it seems. Sit down for this one. Toronto during the same period had an even higher correlation with oil prices… 0.89.

The two are very close, and this stays true (though in lower correlations) for the periods of the last 10 years and the last 5 years, inflation adjusted and nominal. Even figuring in moving averages with terms as long at 3 years to account for lagging reactions, there just doesn’t appear to be substantial differences between the two cities.

So, while a high positive correlation remains, I think that this finding of a non-oil and gas market having as high or higher correlations would pretty much refutes an actual relationship between oil prices and housing prices in Edmonton. Home prices here appear no more linked to oil prices then other cities in Canada. 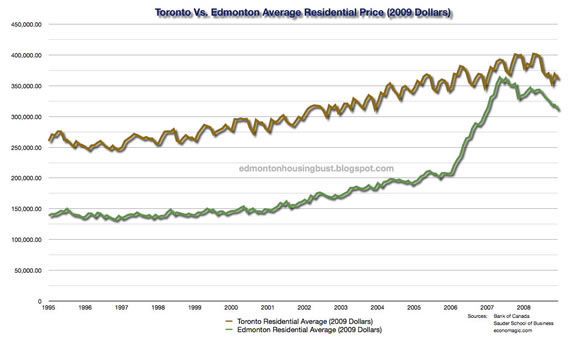 To look at it from another angle, there is an equal correlation between real estate prices in Edmonton and Toronto, as their with between Toronto and oil prices. Though this should not be surprising since both also had similar correlations with oil.

In any case, I would have to conclude any kind of relationship between real estate prices and oil prices is anecdotal at best. It looks to be a spurious relationship caused by some lurking variable(s), and likely present in most if not all Canadian markets.

As is often said in statistics, correlation does not imply causation.

It seems that the real driver of real estate prices has probably more to do with the overall financial markets of which oil is a part of, or perhaps the economy as a whole… which would at least in part explain Toronto having just as high a correlation. 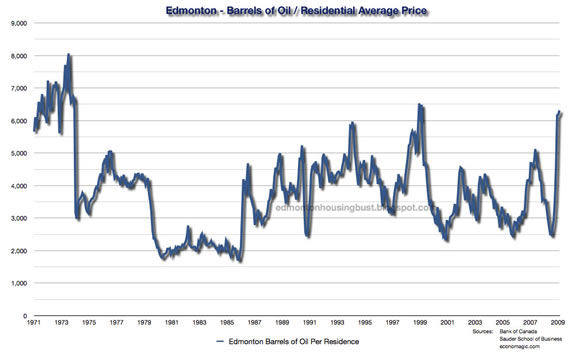 And just for shits and giggles, here is a little measure I derived… basically it’s how many barrels of oil it would take to buy an “average residence” in Edmonton at the market rates.

As we can see, this can be very volatile, with values anywhere from 2,500 all the way to 6,500 not being unusual over the last two decades. The median since 1971 has been 3,835 barrels, with a standard deviation of 1,270 barrels. Such a large range again would make me question any kind of hard relationship between oil price and house price, even figuring in real estate being a lagging indicator.

So in conclusion, while I’m sure oil prices have an overall economic impact on our fair city, of which housing prices would be a part of, from the data I’ve ran I see no tangible evidence of a direct causal relationship between oil and home prices. Any implication of such a relationship appears to be spurious. So, in the absence of any otherwise compelling evidence, this one is… 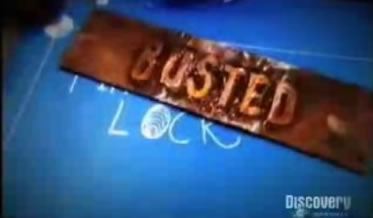