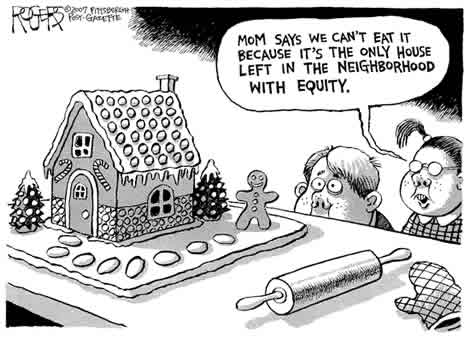 Those you that have been following the blog for awhile, or have browsed the archives, you may have came across my musings on a couple friends of mine (original story, and the update).

Long story short, they bought a spec townhouse in mid 2006 for $200,000. Last October they decided they would be moving to Calgary post-haste and put their place up for sale at $285,000 figuring it would sell in a heartbeat (especially since a year or so earlier their neighbours units were selling for $350-400K). They also put in an offer on a house in Calgary that same week.

Didn’t quite work out that way for them, and after several price cuts and relistings they were still holding it in March and asking price was then sitting at $260,000. Their offer was accepted for the house in Calgary, but fortunately for them the financing requirement saved them as they couldn’t sell and thus the deal fell through. Which takes us to the end of the update I did on them.

The spring continued much the same, no action, and more cuts to the asking price… continued into the summer even. Finally in July they cut it down to $240,000 and it sold two weeks later for $230,000. Everything was finalized last week and they are now free and clear.

They are happy to have it over with, but as needless to say, are licking their wounds after not only getting $50,000 less then they thought they would, but going out of pocket for carrying a vacant property for almost 10 months, then there was the payout penalty.

Frankly they should be grateful interest rates plummeted and goosed the market, or they’d probably still wouldn’t have sold and would be continuing their magic carpet ride to the bottom and negative equity. Fortunately they’re out though, and on the surface ignoring what prices did during the boom, holding a property for three years and selling it for 15% more then you paid is really quite good. Could have been a lot worse.

Of course then you have to figure in all those other costs. The realtor commission takes a big $10,900 bite out first and foremost. Then they get hit with a $9,000 payout penalty because there were still over two years left on their mortgage term.

This should serve as a lesson for all those potential first-time buyers out there who only plan on living in the place for a couple years before trading up… know what you’re getting into and be aware of the penalties for entering into a closed mortage. That lower rate comes with some steep penalties if you don’t play your cards right. These two knew all along they weren’t planning on living there the entire five years, but chased the lowest monthly payment they could get, and it bit them in the ass in a big way.

So, now that 15% windfall only resulted in 5% actually realized. Not quite as impressive.

Of course in their situation, since they immediately moved upon listing, over the ten months they also ate roughly another $13,000 in carrying costs (mortgage interest, strata fees, basic utilities). Which would technically put them in the red, but because of the way they did it you have to figure in even best case they were going to have to carry it for a couple months… so, we’ll say they broke even on the venture.

Not quite the cash cow they envisioned when they listed it ten months ago. The ultimate irony being that is they had listed it agressively in the first place they probably could have sold it right away for $240,000-$250,000 before the market further slid, saved a bunch of carrying costs (though would have suffered a bigger payout penalty), and actually cleared some profit… but the idea of getting their price was too much for them at the time, and they ended up worse off for it.

They’re currently renting down South, but have just signed on to get a custom house built. At least this time they waited to actually sell before committing, and this place they intend to stay in for the foreseeable future. They learned some expensive lessons the hard way, but were fortunate that it came out of unrealized gains and didn’t ruin them.

Those that bought those townhomes at the height of the boom when they were going for $350,000-$400,000 on the otherhand… they’re proper fucked.