By: Aaron Sims
In: HPI 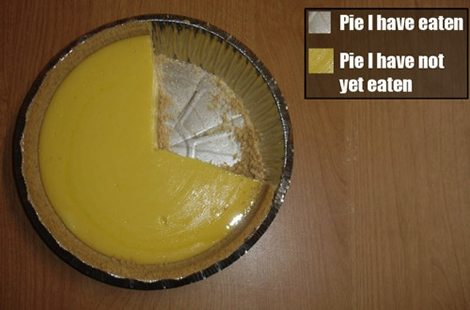 So, another week goes by, another apparent bull market rally turns out to be little more then a trap… but at least the Eskimos won last night!

Anywho, so I guess the big news this week for Edmonton real estate was that the decline in the new housing price index… down 11.7% year-over-year as of June, biggest drop in the country.

This of course if more then the 4.2% down the resale market was down year-over-year as of June (using the SFH Median fwiw). So you may be wondering why it’s down so much more, but as we discussed a few months back, new home prices tend to lag the resale market.

That’s predictable just from the nature of the transactions, resales generally go down over the span of weeks from deal to closing (sometimes even mere days)… whereas new construction can have months between the deal being made and it actually closing. Often they are bought on spec and construction doesn’t start until there is a deal in principle. So most of those properties figuring in that 11.7% drop were actually negotiated back in the fall or winter (or even earlier).

As I don’t think we’ve discussed this measure before, here are the historical figures for the new housing price index. 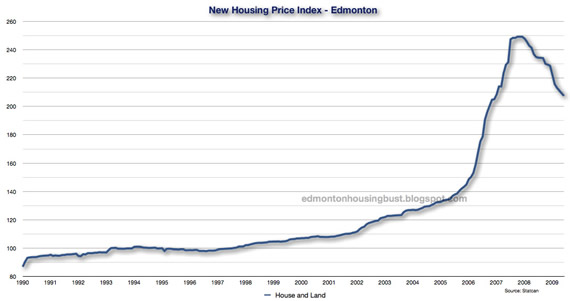 Here we see a pattern quite reminiscent of the resale market, but shifted about six months later. Beyond being down 11.7% year-over-year, we’re also down 16.7% from the peak… which is in the ballpark of what’s happened to the resale market.

So, in the coming months it will be interesting to see is the new construction market had a spring bounce of their own or not, unfortunately that won’t show up until November or December.

Though, as we’ve been seeing with the Teranet HPI figures for Calgary, the overall market numbers trending up are not necessarily a reflection of actual property values as these HPI’s more accurately measure… as while the market stats are increasing month-over-month, the HPI is actually still declining slightly… so property values are still actually dropping, but there has been a shift in what’s selling and thus the market stats increasing is actually rooted in more activity at higher price ranges. 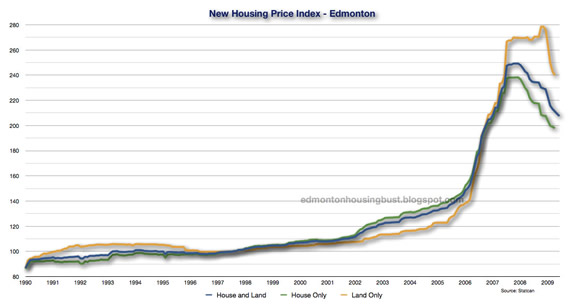 Since I had the numbers handy I figured I’d include this as well, it breaks the earlier graph into ‘house only’ and ‘land only’.

It’s interesting to see just how reactive the land prices have been, when before the boom they were actually lagging behind home vales in appreciation but then took off and ultimately ended up increasing far more then house values.

From January 2004 to their respective peaks, land values increased 139.5% and didn’t actually top out until last fall… house only values increased 81.4%, and topped out in the fall of 2007 on the other hand, a year earlier.

So, food for thought, something to send you off on your weekends with. Have a good one guys and gals, and if you’re looking for something to do, check out The Frige!