May numbers are in

Sorry I didn’t get to report this earlier in the day, unfortunately I had to do some actually work. Bummer, I know, but believe it or not, communicating my worthless ideas to literally threes of people, free-of-charge, doesn’t pay the bills.

Anyway, the local numbers for May were released today, and it seems that with the aid of all-time low interest rates, spring has sprung. Best sales tally they’ve had since the boom, and actually ignoring the boom years, it was the best May sales total in at least a decade.

The spring bounce also arrived for prices, averages were up around 4% (excluding townhomes) over April. The SFH median was up as well, but only 1.6%, so that would indicate sales are particularly strong at the high end of the market. Further reinforced by the residential average being up more then it’s components.

Year-over-year though, prices remain down, 4-6.2% for the most part, though townhomes are down over 12%. Like I’ve said in prior posts, townhomes are such a small segment that it’s more vulnerable to fluctuations.

Inventory continued to hold, and is extremely high by historical measures. Typically this time of year inventory is fairly stable through the summer, while sales will start to decline either in June or July. 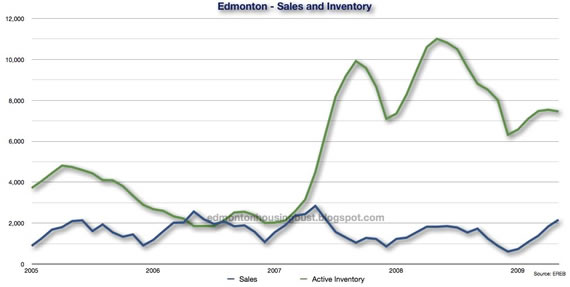 It seems the low interest rates have gotten a fair number of buyers into the market. It seems though that it’s allowing first-timers to spend more and many are skipping a rung so to speak and going straight into mid-sized homes rather then typically entry level properties like condos, or smaller bungalows.

So while increased sales is certainly welcome news in any market with an inventory glut, it could be better in our case if more sales were in the entry level segment. It is these smaller units where our primary inventory problem is, as there was a great deal of speculation in that market during the boom (both with flippers and builders). 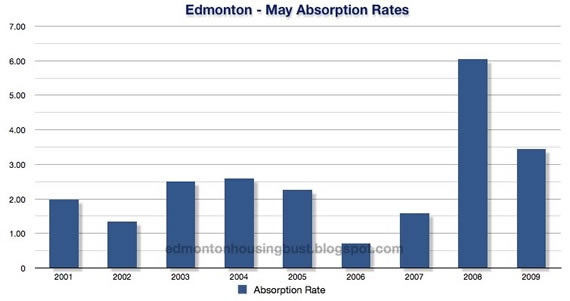 This is evident in the absorption rate, where SFH’s are currently well into balanced territory currently at 2.5, while condos are still well into a buyers market at 4.2 (FYI, the overall residential rate is standing at 3.45, which is just in balanced market range, though still very high for May).

So, while the SFH market appears to returning to normal range, condos are still a very soft market. So while it may not be good for the overall market that condo sales are proportionally a little low, it’s probably better for the individual buyers that they bought into a more stable segment.

As I’ve been saying, real estate is prone to a lot of seasonality, and spring in particular is known to be very strong, so it’s really the rest of the year that tells us the overall direction of the market. This spring in particular has also benefited greatly from the huge drop in interest rates… but those interest rates also present problems going forward, as they now have nowhere to go but up.

They may have already started their climb as yesterday RBC lifted their 5-year fixed rates by 0.2%. BMO and TD have since followed suit, and the rest of the major lenders are expected to as well. This has been caused by yield increases in the bond market over the last two weeks, and while it’s too early to say whether that is more then an aberration, if they continue trending up, mortgage rates will soon follow.

It’s something of a double edged sword for real estate, because if you want sales now you need to keep rates low… but for the long term health of the market it needs the overall economy to improve, and once it starts to improve bond rates go up, and with them interest rates, which hurts sales in the short term.

It’s an interesting time. Many western nations are really keen to keep rates low and spur spending through measures like quantitative easing… but China has told them to watch their step, and they being many nations largest creditor, particularly of the US, they have some stroke.

Anywho, enough of that, here are the hard numbers.

Also included this month is a new feature. One of our readers has been tracking the median MLS asking prices, and I figured I’d start including them in our monthly updates.

*SW number is for 2-story detached homes only, all others are for all residential units in the area