By: Aaron Sims
In: Macroeconomics

It seems a lot of realtor blogs out there like to label anyone that doesn’t encourage everyone to run out and buy a house as purveyors of “Doom and Gloom.” Seemingly we are advising everyone to just give up, stock up on ammo, and start working on recipes for rock soup and roadkill.

I can’t speak for the rest, but I don’t see doom. What I do see is a return to 2005 or so, or even 2005+20%, to figure in the time value of money. Real estate prices going down isn’t even gloom for that matter… well, other then for those that bought in the last three years. It’s not until prices get back to affordable levels that the sector as a whole will get back on track and sales recover. Great gains can be made during a bubble so long as one remembers it’s a bubble, it’s only when one mistakes a bubble for the norm that they get in trouble.

Sure, they’ll be some gloomy days in our near future. After all, we’ve only just gotten our feet wet in this worldwide recession/depression (“re-pression” anyone?!), but that goes far beyond real estate.

And 2005 wasn’t so bad! As I recall it, it was actually pretty good. Optimism was high in Edmonton, business was good, money was flowing, Russell Crowe was throwing phones at concierges, no one had heard of Joe the Plumber, and I was dating this tasty little number from Mexico City. Things were good. I mean, things were really good, that girl was wild!

Okay, okay, back on topic.

Why 2005? Well, that was really the last time real estate prices were still in line with historical values and household incomes. Things started to go crazy in 2006, and didn’t slow down well into 2007. For the last year and a half we’ve seen prices slowly make their way back down, and there is still a long way to go.

But for those that bought in 2005 or earlier, which is the vast majority, you really have nothing to worry about (as long as you didn’t treat your home equity like an ATM during the boom that is). You’ll end up just as well off as you were just a few short years ago.

Unless interest rates suddenly jump into the double digits I don’t see property values overshooting that landing by any appreciable margin. And looking at the long term rates banks are offering, they don’t seem to be indicating such hikes will be coming… but if they do, yeah, you might want to grab those guns and start working on that rock soup. 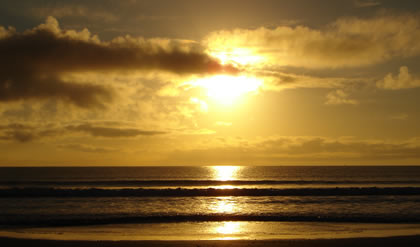 For the renters out there, it’s time to start playing hardball with your landlords. Vacancies are rising and rents are dropping. With more and more “accidental landlords” emerging every month, you’re just gaining more leverage.

For the landlords, if you were established before the boom you should be just fine too. If you could make a go of it before, you should have no problems adjusting now… and lets remember, you made off like bandits during the boom, so you’re good to go!

Some will tell you that downturns are all bad news, but busts are actually necessary and healthy for the economy in the long run. Like any business cycle, there will be winners. Those with money in hand, hold the power, and are going to be able to profit from this cycle. Unfortunately there will also be losers though, and those that got themselves over-leveraged during the boom are going to have a very rough time of it.

As long as we’ve had financial systems, we’ve had booms and busts. While neither is particularly healthy by themselves, they do seem inherent, inherently human in fact. The presence of one requires the presence of the other. No matter how many we’ve had in the past, and lessons we’ve learnt, one day we will again repeat the cycle.

When that next boom comes, we will again tell ourselves that this time it’s different, this time we’re different… but the results will be the same. A bust is just a necessary remedy for a boom. So even though those with a vested interest in the current bubble keep urging you to spend, spend, spend… all you’d be doing is trying to re-inflate that artificial bubble. We can’t spend ourselves out of a recession we’ve spent ourselves into, we would just making the underlying problem worse (in this case, debt), and making the ultimate fall that much further.

We weren’t the first to go through it, and we won’t be the last. There is no doom, we’re just heading back to where we should have been all along. No better, no worse.

It’ll take a couple years to get there, and there will be some tough times along the way, but we’ll get there. So just keep your head up and soldier on… and fellas, if you can, get yourselves a girl from Mexico City, seriously, you’ll thank me!