So, today I’m going do another reader request and to take a quick look at population/migration and it’s effect on real estate prices. Many speculate that it was high migration and growth that not only triggered the run up in prices, but also argue that it should sustain that level of prices. We’ll see if that theory stands up and earns my unpatented stamp of approval, or not. 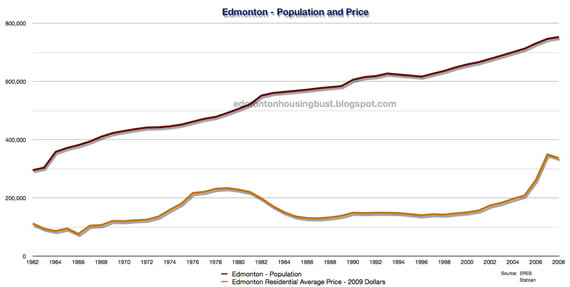 Lets start with population. Here is a look at Edmonton’s reported population from 1962 to present, charted against the inflation adjusted residential average price in Edmonton.

As we can see there, the population curve is quite gentle and consistent. Contrast that to the price curve, which the late 70′s bubble is quite pronounced, as is the spike in prices witnessed of late.

It could have likely been deduced from the first graph, but here is some further derivation to back up that overall population growth doesn’t appear to have much impact on prices. Prices are very volatile, and largely appear to move independent of population.

Thus we will conclude that overall population growth has no direct relationship with residential real estate prices. Now, onto migration.

Now here is a graph of net migration and year-over-year price change (bear in mind those migration figures are for the entire province, not just Edmonton). If there was a relationship between the two, one would expect that migration would be the leader, but as can be seen in 70′s through the 80′s it was actually price that lead through the first bubble. We can also see that through the 90′s, even with fairly good migration, prices really didn’t seem to respond.

There are some periods that may appear to support a relationship, like in the late 80′s and in ’05 and ’06, but on a whole it doesn’t appear there is any direct relationship. It’s also interesting to note that the recent spike, which reached record level in 2006, still doesn’t appear to be anything exceptional, and migration retreated quickly in 2007 and 2008 back to historical norms.

This leads me to conclude while there is likely some short term effect of migration on price, but in our recent boom its effect was probably over blown. I would hypothesize that the shortage of inventory and rental units experienced was more rooted in speculative buying then actual increased demand.

As we’ve seen an explosion of listings since the peak, particularly of condos and smaller homes, largely of which have been sitting empty. This appears to support the hypothesis that we saw a great increase in properties bought, and then held to be flipped at a later date.

This sort of behaviour was also evident in the rental market, where the number of total units dropped from 75,267 in 2005 to 67,907 in 2008. These were largely due to condo conversions. That kind of contraction will of course increase demand, even if the population increases. The number of occupied units actually only increased about 775 from ’03 to ’06, then dropped by over 4,000 in ’07 and another 3,000+ further in ’08.

Beyond that, our current situation where we find the city seriously overbuilt and with another 10,000 units in construction. We can’t get to that point without demand being perceived as much higher then it is in actuality.

So, while a rapid increase in migration could likely pinch supply short term, the escalation of prices we experienced here was more rooted in speculation and good old irrational exuberance.

And as far as long term price support goes, not a chance. As I’ve said before, Edmonton isn’t Manhattan, we can build for as far as the eye can see in every direction and generally it’s not any problem getting materials or labour… any short term situations where demand outweighs supply, will quickly be corrected… or as we’ve witnessed, over-corrected.

At least that’s my opinion.

EDIT: Had a request for the graphs of change in net migration vs change in price, so here they are. I had already prepared them, but they got cut from the original post to keep the length down.