So I have been asked to do a post on the employment numbers a few times in the past, and again recently… and as the latest (June) figures were released today, I figured what the hell, why not do something topical?!

Not really sure how much or what kind of narrative will come of this, at least I don’t have anything in mind. I’m just planning on presenting some historical numbers and maybe offer my take on them or any observations that may or may not strike me at some point.

So, without further ado, lets start with the hard numbers, just to give us some background before we get to the ratios.

So here we have the figures for the total work force, total employed, and total employed full-time since 1976 to now. Generally fairly stable, particularly the labour force numbers. The employment and full time employment figures track very similar patterns and are bit more volatile, as we can see a fairly significant drop back in the early 80′s… a couple minor dips in the mid 80′s and again in the early 90′s, then fairly stable growth until just recently when we’ve had another fairly significant drop.

It’s worth repeating, these are the hard numbers not ratios. As we can see, the labour force has grown significantly since the 70′s, so relatively speaking, 10,000 jobs lost in 1982 would be felt much more then 10,000 lost in 2009, at least by the economy as a whole. That will be displayed later when I get into the ratios.

Just to compare the peaks and troughs of the aforementioned dips.

As we can see, as far as hard numbers go currently we’re somewhere between the the magnitudes of the minor and major recessions. It is also good to note that full-time jobs take a bigger hit during downturns then total jobs, to varying degrees. Many feel the full-time numbers are actually the more telling, and I tend to agree.

Just to add a little more perspective to the hard figures, here they are again as a function of the total work force at the time (ex. If the workforce is 1,000, and there are 10 jobs lost, this measure would equal 1%).

From this measure we can see the magnitude of the job losses have been worse then the 90′s recession, but not nearly in the territory of the big one in the early 80′s. But that one also took two and a half years to get that far, whereas we are only 8 months removed currently and there is still a great deal of uncertainty surrounding the economy.

Just for example, our lowest figures were from March, and actually went up in April and May before taking another hit in June, leavingus not that far above the March figures (down 49,100 and 70,100 from peak FWIW).

While we’re talking hard numbers here they are for part-time and unemployed (grouped together for no reason other then scaling). Interesting to note how part-time employment has actually been quite stable, only taking a dip in the most recent boom… likely as a result of the shortage of workers, people were obviously drawn into more permanent positions. Since the boom ended though, we’ve seen something of a spike, as many full-time jobs were either converted to part-time, or were lost and people could only find part-time replacements.

The unemployment figures, not surprisingly, mirror the earlier findings, and when jobs are lost obviously the ranks of the unemployed swell (necessitated by, as we noted earlier, the labour force not contracting). We also notice the sharpness of the current spike hasn’t been seen since the early 80′s, but considering the population is much higher now then then, to total number of unemployed haven’t reached any kind of danger area. Obviously if the current trend continues that would change, but it’s very hard to make any predictions as not just ours, but the worldwide economy, is such a big question mark at the moment.

Now, onto the ratios! 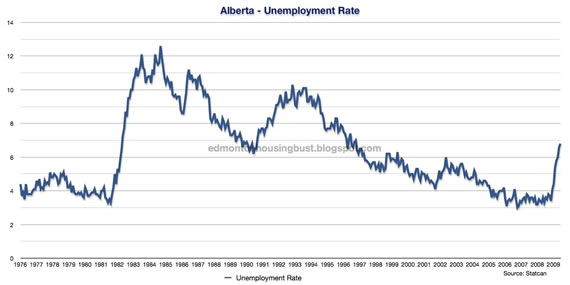 This is the one that gets all the press, the Unemployment Rate. As we can see here, there is definitely a sharp spike, but it is paled in comparison to the prior recessions noted. Even during the early 90′s recession unemployment topped the 10% mark, and we’re currently only at 6.8%.

This is another one that can change fast though, it’s went up a full point in the last three months, and 1.7% in the last six, and 3.5% in the last year. So some more economic turmoil could certainly launch us up into that territory, but at least for the moment we’re alright. For some further historical context, since 1976, the median has been 5.7% and average 6.5%… so, all things considered, we are a bit high.

These are the participation (labour force divided by population) and employment rates (total employed divided by population). As we’ve previously noted, the labour force doesn’t tend to change much, so the participation rate isn’t all that interesting. Employment rate is alright, but I think full-time jobs are a better measure then total jobs for practical purposes. So, take them for what they’re worth, maybe you like then, and they report them, so here they are.

But, like I said, I find full-time employment a better measure, so I derived my own ratios. These measure full timers as a function of population and labour force, and give you a better historical comparison then just the hard numbers listed earlier. We’ve pretty much already been over the genesis of these figures, and this is getting pretty long already, so I won’t regurgitate all that.

Again we can see that our current position, historically speaking, isn’t all that bad… but it’s trending harshly in a bad direction, and at a severity we haven’t seen since the big recession back in the early 80′s.

So, that’s all for now. If you have any questions or comments, fire away. I may add more or clarify some stuff as I think of it.