Earlier this week I did an entry on the relationship between oil prices and housing prices in Edmonton, and there were some interesting findings which led to new hypothesis’. There was also some good ideas that came up in the resulting discussion.

So tonight I’m going to take a bit of a deeper look at possible relationships with housing prices… or maybe I’m just doing it because that last one got lots of comments and I’m an attention whore… it’s really hard to say.

In any case, beyond just oil we’re going to look at natural gas, stock markets, and several other possible indicators. Be forewarned, there is going to be a ton of charts and graphs in this one, so if that isn’t your thing, well, you’re probably on the wrong blog. Anyway, this one will be a big’uns.

Like the last entry, I’m going to use Toronto as my control sample. Partially because Toronto isn’t exactly known for oil and gas (well, other than hot air… I kid, I kid), and it’s also the city I have the next best data set on.

This time we’re going to be using yearly averages rather than monthly, so you’ll notice the graphs look a bit different. As real estate tends to be a bit of a lagging indicator and prone to a fair bit of seasonality, yearly may actually be the better measure. I also have the yearly averages for Toronto going much further back, so that should improve the findings.

And here we have a plot of oil (West Texas Intermediate) and natural gas (Henry Hub) over the same period, also yearly. You’ll notice they chart fairly similar paths. You may be thinking to yourself that this graph doesn’t show prices getting as high as you recall, or diving last fall, but remember, these are yearly averages and/or spot indexes. These won’t look nearly as volatile as daily, weekly or monthly figures… for example here is the the monthly figures semi-transparent over the yearly ones.

As discussed in the prior entry, oil and home monthly prices in Edmonton had a high correlation… but they also had a very high correlation with Toronto prices. Which led me to conclude it was a spurious relationship.

These correlations remain using the yearly figures over a longer term… and are also present with natural gas. Though that shouldn’t be surprising, as noted earlier, oil and gas followed quite similar paths and actually have a correlation of 0.89 from ’72-’08.

As a result, I would again hypothesize that the correlations are due to a spurious relationship, due to a common lurking variable.

Here are a couple scatter points to illustrate the what we’re looking at. 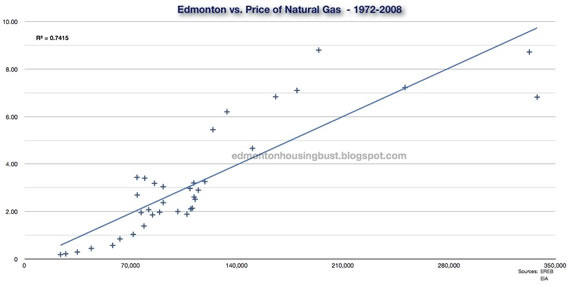 You’ll notice the R2 value is lower than the correlation. For those unfamiliar, R2 is the coefficient of determination, and is the correlation squared (so, obviously its symbol would just be R).

In those graphs you can see the general trend formed over time. The higher the correlation, the tighter the plot points correspond with the trendline.

You may be wondering if there is a relationship between year-over-year gains… and to answer that in a word… no. Regardless of the city and the commodity (or any of the multitude of other indicators discussed later for that matter) any relationships are negligible at best.

To give you an idea of that, lets contrast the above graph of Edmonton vs natural gas prices to Edmonton’s year-over-year price change plotted against those of natural gas. You’ll note in the earlier graph that the points are often grouped and you can see an overall trend.

Now note in this year-over-year graph that the points are all over the place with no apparent rhyme or reason. The R2 is also almost 0, which just reinforces that there is little or no relationship.

As I have said before, I think the relationship between oil/gas and real estate is a spurious relationship due to a common lurking variable… and I’ve theorized that variable could be the greater economy and/or financial markets as a whole.

To further explore that line of thinking, I compiled a couple spot indexes for the NYSE Composite and S&P/TSX Composite. Here is a look at how those have performed over time. 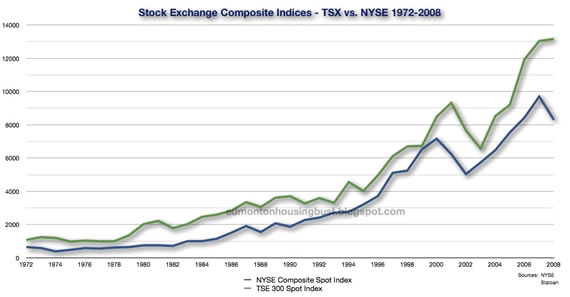 These being composite indices they give you a good idea of the overall stock markets. With the NYSE being the largest stock exchange (by dollar value) in the world, and TSX being the dominant one in Canada they should be pretty good indicators for our situation.

The findings also may support my earlier musing, with both having significant correlations with real estate prices in both Edmonton (NYSE-0.87 TSX-0.92) and Toronto (NYSE-0.88 TSX-0.89).

To go a little deeper even, I consulted a Statcan report of the leading business indicators. These include ten different measures (including the S&P/TSX index) from various sectors of the economy.

Here is a look at just a few of those and how they’ve charted out. 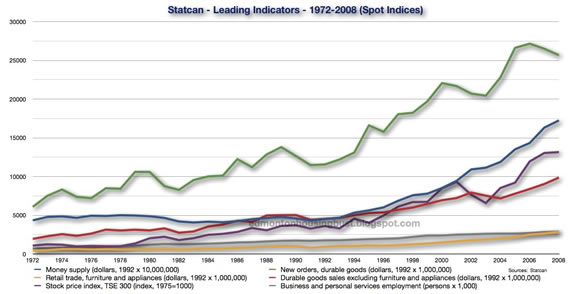 I’m not going to look any deeper into these specifically, I just wanted to give you guys an idea of what they graphed out like. All the measures listed above appear to have a decent correlation on one level or another with real estate prices, except the average work week one which didn’t appear to have any correlation.

What I found most interesting was the composite of those ten different figures. As it covers many different sectors of the economy, it gives you a measure of the economy as a whole. As such, I’m going to focus primarily on that single measure, and here is how it graphs out.

And here is a scatter plot of the composite vs Edmonton real estate prices.

You’ll note that the points all plot fairly close to the trendline. Also interesting to see the snakelike pattern, which is present in the the natural gas plots earlier, but are not as clear as in this one.

Here is the time series for the leading indicators and Edmonton’s real estate prices. We can see there is far less variability in the composite than in housing, but they both are clearly trending up. This also reveals itself in a high correlation between the two, 0.92. The relationship also remains very strong regardless of the term, something that cannot be said for oil or gas which vary from very strong to moderate depending on the period.

Here we see the same composite graphed with Toronto prices. Again they look quite similar, and real estate remains the more volatile. The correlation for these two come in at 0.90.

FINALLY, we’ve arrived at the last graph. Here is the Edmonton prices plotted out with the composite, oil and natural gas prices for comparison. Yes it’s a bit of a mess, but I tried to make it as understandable as possible considering the multiple axis’ values. But I think it’s a good visual anyway.

I’m sure some will take exception with the scaling, but I tried to be as fair as possible and match up the various lines with housing prices long-term as best as possible. So just as a disclaimer, scaling can be misleading, so take it for what it’s worth and remember these can be made to appear to back up any conclusion.

Alright, here we can see the relative volatility of the four indicators. Oil and gas being the most so, then real estate, and finally the composite which is very smooth and relatively straight. It’s this smoothness is probably what yields the consistently high correlations, as all the prices increase over time.

I suppose one can see any number of things from the graphs, but I feel that these findings largely back up my earlier hypothesis that housing prices are probably more closely tied to the overall health of the economy, than to individual commodities.

While oil and gas certainly effect financial markets and the economy as a whole, throughout Alberta and Canada, it is still but one factor, granted one of the bigger.

That said, I’m not sure a direct causal relationship between be proved between the economy and real estate either. The economy is too complex for even an army of economists with lifetimes to study it to truly understand… much less one half-assed blogger.

So again, I conclude that while oil and gas certainly has a big effect on the local and national economy, I feel they do not have a direct causal relationship with real estate prices. But I don’t think any single indicator can claim a direct causal relationship. Real estate prices are effected by hundreds, if not thousands of variables… earnings, supply, demand, seasonality, land, labour, materials, just to name a few.

Oil and gas prices would certainly effect several of these, but there is a limitless interplay amongst these variables and countless others, and the effects of all these just cannot be quantified in an acceptable fashion.

That the same correlations exist between oil and gas prices and cities in both producing and non-producing regions indicate that real estate prices drill a lot deeper. Pardon the pun.