Again I apologize for the lack of updates, but as I’ve said, I am swamped with actual work, so blogging has taken a back seat… and unfortunately there is no end in sight just yet, so, it is what it is.

I seem to be getting a lot of e-mail from people who have recently bought for some reason, often accompanied by a series of calculations of why it was a good idea. They seem to be looking for some kind of validation, so I say I’m happy for them and wish them luck.

They then reply saying that they though I was against buying now… to which I reply, I am, the fundamentals of the market are extremely poor, and as such they are exposing themselves to a great deal of market risk all for very little potential upside, that their calculations are flawed (and how)… but that it’s their money, and if they’re happy with their purchase that’s all that should matter to them.

Most don’t respond again after that point, though the one that did, did so with a very succinct “Fuck you”… not terribly clever, but I do appreciate brevity. I guess this must be just a small taste of what Garth Turner gets on a daily basis over on his blog.

Anywho, enough of the self-aggrandizement. Today I’m going to take a look at the relationship between rents and incomes in Edmonton. Just recently Statcan came out with their most recent Survey of Labour and Income Dynamics. Notably because as far as I can tell it’s the only freely available source of historical market incomes in Canada. Unfortunately data is a year or two behind, but beggars can’t be choosers. Here is a look at the household median numbers for Edmonton through 2007, real (inflation adjusted to 2009 dollars) and nominal. 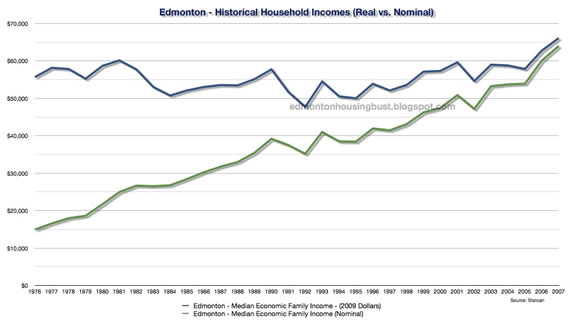 Not surprisingly it was up over 2006, but not as far as many figured it would be. In inflation adjusted dollars it was up 5.3% year-over-year (from $62,750 to $66,100)… which would normally be quite impressive, but many had been prophetized these would be in the 10% range year-over-year (and even then it wasn’t nearly keeping pace with home prices).

It should be noted, average household incomes actually were up by over 10%… jumping from $76,875 to $86,150 (a 12.1% increase). But, as most know, average isn’t a great measure (as it tend to skew significantly), especially when the median is available. So, as per usual, we’ll be sticking with the median whenever possible.

Getting back to the graph, it is worth noting that this is by far the highest real incomes ever seen in Edmonton. Historically they generally have resided in the $50,000-$60,000 range, and as of this measure they’ve eclipsed the $65,000 mark for the first time ever.

Going forward it will be interesting to what happens to incomes… depending on the methodology and timing of when the survey was done, and how it corresponded with that little economic hiccup that hit in the fall. So, if incomes don’t drop for the 2008 SLID, I’d imagine they’ll take a big hit by time the 2009 numbers come out… but we are a year and two away respectively from knowing those.

Here we have the nominal incomes and average 2 bedrooms rents charted out…and before you say, ‘but, but, but I thought you said averages suck?’ They do, but this is one of those cases where it’s the best measure we have, and for what it’s worth, in the case of rents it probably doesn’t tend to get skewed nearly as bad as averages for items like income would.

One would expect them to chart a similar pattern, and they appear to, but that could just be me cooking the scaling, so here’s a scatter plot. 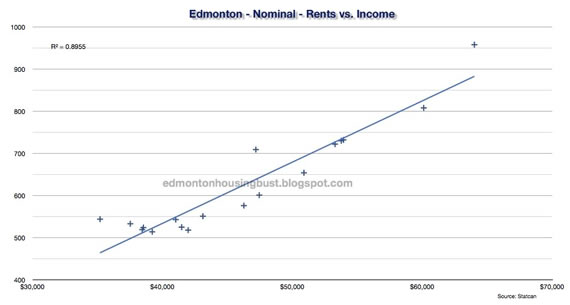 Unfortunately with rents only going back to 1990, this isn’t a major sampling, but they do appear to follow a general pattern and the R2 value is fairly significant at 0.8955. There are a few plots that are off a bit, but they’re all in the general area.

I didn’t find either of these graphs to be overly relatable though, so I devised another measure to graph out.

As we can see there are three quite noticeable spikes. In 1992, 2002 and 2007… ’92 being the highest, when it was over 18.5%. Going back to the first and second graphs, we can explain those spikes in ’92 and ’02. as a result of very noticeable and sharp drops in income… which looking at the general trend I would chalk up to aberrations in the survey results, thus incomes were probably reported a bit lower then they really were.

Incomes likely were dropping at those times, there were significant recessions those years, but I just suspect they didn’t drop to the degree witnessed in the data. There does appear to be a fair bit of fluctuation in the numbers over the life of the SLID, so the incomes have made a very jagged pattern as many of the spikes are probably largely due to over/under-reporting, and it’s really more the overall trend to pay attention to. So when the numbers on either side are relatively close, but the one in the middle is way high/low, it’s probably largely an aberration.

It is interesting to note that for 2007 though, incomes were actually up a fair bit, yet rents increased even more. So this is very unlike the other two spikes, as this one was rooted in a disproportionate hike in rent. This will only become more evident when the 2008 numbers come out, as there was another big rent hike that year.

Using the long term average/median of 16.2%, and guesstimating a continued growth of incomes to $70,000 that would suggest rents in the $950 territory… while as we discussed last week, currently rents are around $1050 currently, though the rental market is becoming increasing soft here, and decreases have already been witnessed in Calgary.

Time will tell, but for now at least it appears that first real estate prices broke from incomes, then rents did, and they now both appear to be higher then market incomes would suggest they should be. It’ll be interesting to see how it all plays out.

Anyway, I don’t think there is anything ground breaking in this data, but it is good food for thought. If you have any questions or comments, fire away!