The sad state of the news media really hit home this week… literally it seems for me. I’ve been pointing out how the real estate groups have been plastering their ads all over the place, and also seem to get some to get more then their fair share of favourable press as a result.

Well, it isn’t just real estate that gets such treatment.

I usually try to watch the six o’clock local CTV news, or at least have it in the background. Well, Monday I was surprised to see an ad for the Town of Westlock displayed prominently. Normally such things may have gone overlooked, but as I grew up in the area, this caught my attention.

And what do you know, the very next night, the CTV news had a great big puff piece on the Town of Westlock. So, that’s about as much circumstancial evidence as I need to convict on charges that buying ad time is all one needs to do to get your ass kissed publicly.

Not that Westlock isn’t a wonderful town, it is… if you’re looking to score drugs. So yeah, it’s a bit of a shithole, but I say that with love… and just to show I haven’t forgotten my roots, it’s not half the shithole Barrhead is!

Ahh… the pathetic state of main stream media. Anyway, enough babbling, on to the real show.

So, as my faithful readers already know, I’ve been tracking the mortgage in arrears figures for a few months now. Usually I’m right on top of it… and usually there release if greeted with a great big ‘Meh’ from the media.

Of course, this has been the month from hell at work for me, so while I did mention these numbers last week in the comments I didn’t get around to doing a full post until tonight… and because of Murphy’s Law, earlier this week suddenly Alberta having the highest arrears rate in the country was of course suddenly news… even despite our knowing this two months ago… and now to all the googlers out there now I look like a follower, those farkin’ sneaky bastages! 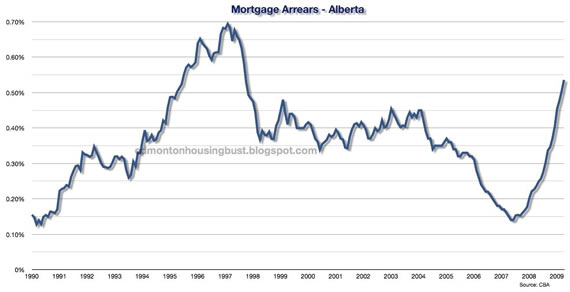 As mentioned, this is the highest in the nation, and by a growing margin, Atlantic Canada in the next highest region coming in at 0.45%. Nationally the rate is 0.40%, and Saskatchewan has the lowest rate at 0.21%.

It is worth noting that apparently only about 60% of lenders are represented in these arrears figures, and are typically the more established outlets… so the actual figures are probably a bit higher as many of the higher risk outlets are not represented. That said, this data is still pretty good, and should be fairly representative historically.

We’ve been over this before, so if you’re that interested you can search the archives. This month I’m going to do a comparison of how arrears relate to foreclosures. 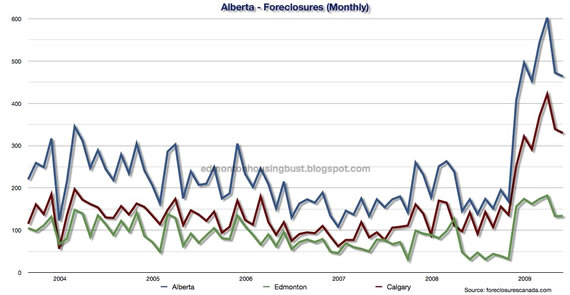 This is a four month moving average of foreclosures in Edmonton and Calgary from foreclosurescanada.com. Yeah, it’s pretty erratic. If I have time I’ll do it with a moving average and that will clean it up a bit. They do their measure weekly, so some months get four weeks, others five, and it makes things a bit jagged.

Regardless, we can clearly see there was a BIG spike come the 4th quarter of 2008. Now lets compare this to the number of mortgages falling in arrears over the same period. That’s mainly what we’ll be looking at. Oh, and that’s not really an ‘Alberta’ number, that’s just Edmonton and Calgary combined… but it’s late and I’m not gonna fix it, so just keep that in mind. In any case, it’s more the relative values we’re concerned with anyway, and insofar as that goes, this is fine.

Though, it is interesting to note how Calgary is having significantly more foreclosures then Edmonton. Historically Calgary was proportionately higher, but now they’re damn near double. They had largely tracked together, and that they suddenly decouple in the second quarter of 2008 only to resume tracking but at a much lower level… this makes me suspicious of the Edmonton numbers from then on. Very odd, especially considering the market conditions.

Obviously one would expect a correlation, as a mortgage falling three months into arrears will signal the beginning of the foreclosure process. We can see that the upward trend for both started in a small scale in the second half of 2007… no surprise, as that’s when the prices started to fall.

But it wasn’t until 2008 that arrears really started to take off, and decoupled with foreclosures. It’s interesting that while arrears climbed steadily, foreclosures leveled off in the winter of ’09 and then declined in the spring… only to itself rocket up in the fall.

We should probably be wary of this observation (re: foreclosures) in light of our earlier one of Edmonton’s numbers suspiciously dropping at that time, which would account for the drop. Now, if my suspicions are valid, intuition would suggest that the foreclosure level probably would have remain somewhat flat over this time while arrears were still rising… only to eventually shoot up themselves.

Again in 2009, arrears continues to grow, while foreclosures have leveled off… so it will be interesting to see what happens in the second half of ’09 with these figures. There appears that there could be some seasonal differences, while arrears keeps growing, banks for some reason appear less likely to foreclose in the spring… which are typically strong periods for sales and prices, as we’ve seen this year, and last, despite general downward trends.

It’s an interesting observation that the strength of the market doesn’t appear to have near the effect on the mortgage holders as it does the lenders. Mortgage holders appear as likely to fall behind at any time, whereas banks seem less likely to initiate foreclosure when the market is ‘hot’.

It is worth mentioning that I believe these measures are calculated differently. Foreclosures are the numbers instigated over any given four week period… whereas arrears is more an accrued figure consisting of all mortgages that are between 3 months behind on payments or more but not yet foreclosed upon. In other words, a property in arrears may be counted as such for several months, whereas a property in foreclosure will only be counted once.