Sorry, this will be a bit of a quick one, I’ve been crazy busy, so the blogging is a luxury I don’t really have time for… that’s why the updates are going to be a little slow coming the next couple weeks. Anyway, the CBA released their latest (June) mortgage arrears figures… and no surprise, we’re up again and have now eclipsed the 0.60% mark. 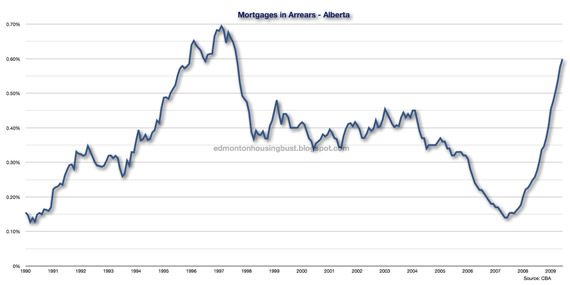 That’s up from 0.58% last month, and 0.26% a year ago. Even the low interest rates and resulting hot housing market in June couldn’t reverse the alarming trend in arrears, as we again draw closer to the previous high water mark of 0.69%.

Nationally arrears stand at 0.42%. Alberta continues to extend it’s ‘lead’ as the next highest rates were in Atlantic Canada and Ontario where they held from May and came in at 0.46% and 0.43% respectively. Saskatchewan now has sole possession of the lowest rate at 0.22%, and Manitoba is next at 0.25%.