The Canadian Bankers Association released their latest mortgage arrears stats today, these are for March. 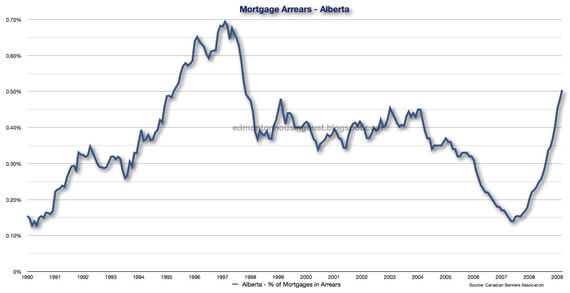 As we can see, they’re continuing their meteoric rise, and have now passed the 0.50% threshold. 2,416 Albertans now find themselves three or more months behind on their mortgages (typically at the point foreclosure proceedings begin, though it often takes another six months before such properties hit the market). There are now over three times as many Albertans in arrears then there were two years prior (740 in March ’07), and well over double the number from a year ago (1,054 in March ’08).

We still haven’t neared the levels witnessed in ’96/’97, but are well above the long term average (0.37%) and the current acceleration is showing no signs of slowing down (if the current trend holds (~0.03% MoM, we could hit the 0.70% level by October).

From mid ’07 on we’ve seen an explosion of mortgages going into arrears, and in the last 8 months this has leveled off at roughly 120% year-over-year increases, which means the figures have more then doubled over any given 12 months. Such year-over-year increases haven’t been seen in the last twenty years, and likely not since the early 80′s when the first bubble burst.

It is interesting to note the contrast with the first graph, where we saw that as many as 0.70% of mortgages were in arrears during the mid-to-late 90′s… and this second graph we can see that was reached after an extended period of more moderate year-over-year increases (30-50%).

This time around it’s been a result of rather explosive year-over-year increases (110-130%), and while it has leveled off, it has leveled off incredibly high and as of yet shows no sign of slowing yet… beyond that, much of the economic turmoil (layoffs, etc) experienced in the new year would still be largely unfelt in these figures.

On a national level, arrears ticked up to 0.39% from 0.38%. Like last month, Alberta again has the highest rate in the country, and is opening it’s lead, as the Atlantic has dropped to 0.44%, while Ontario remained at 0.41%.

At the opposite end of the spectrum, Manitoba and Saskatchewan now enjoy the lowest rates, at just 0.22% each. B.C. is next at 0.29%, but the effects of their housing bust is starting to be felt as the rate there is growing rapidly (they were a nation low 0.16% a year earlier).