By: Aaron Sims
In: New Construction

What’s happenin’ negazots?! It’s been a rather dreary day here in the Alberta capital, so I figured I’d do a quick post on new home prices to fill the time.

I’ve gotten several requests to do this, but I’ve never been able to find real great historical data on it… still haven’t, but the CMHC Housing Now reports have been including single detached prices going back to mid-05, so that’s better then nothing.

This is through February, they release their March numbers on Thursday, so you can keep an eye out for that should you be interested in such things. 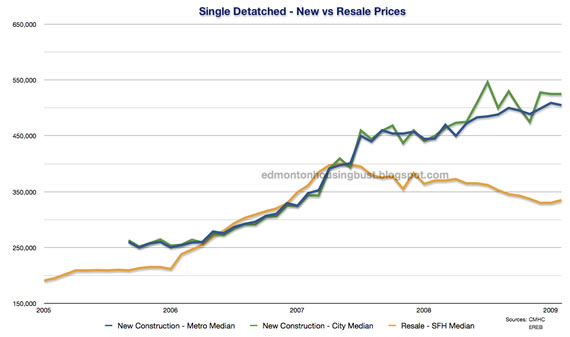 Here we have a graph of new single detached median prices, city proper and metro, as well as resale SFH median for comparative purposes. As we can see, city and metro prices tend to track quite closely.

A few interesting observations when comparing new with resale prices. The big one is how new prices have continued to climb the last year and a half while resale have been going down.

One would suspect some lag, as new sales tend to be largely bought on spec, often the transaction occurs several months before completion. Whereas resale tends to have relatively shorter possession periods. But lag doesn’t account for the difference in this case.

We should note in late 2005, when prices were still fairly stable that new prices were about 20-25% greater then resale (I’d hypothesis that this was likely due to our propensity to build bigger and bigger homes over time, so was likely rooted in new homes having more square-footage)… thus one would expect this to remain, but we can see during the run-up that new and resale prices were about even.

I suspect this was the result of the aforementioned lag effect. As when resale prices settled down and plateaued in that $375K territory, new values eventually also plateaued around $450K.

That of course makes it all the more perplexing that when resale prices started falling last summer, new prices started going up. Really quite interesting, though they seem to have again leveled off.

Further puzzling as sales tallies have fallen off over the same period, like resale, the totals have been really quite poor for the last two quarters, and unabsorbed inventory keeps climbing. Not exactly a recipe for price escalation.

Though, as we’ve been hearing increasingly, it does sound like builders are starting to aggressively slash prices in the last month or two (which wouldn’t be apparent in the above graphs as those figures only go through February). As of February new prices were 50-60%, which is obviously a whole lot more then the 20-25% pre-boom levels.

It’ll be interesting to see over the next few months if that ratio starts to get any closer. If the rumblings of price slashes are true, it could happen quite rapidly as they attempt to clear out inventory.