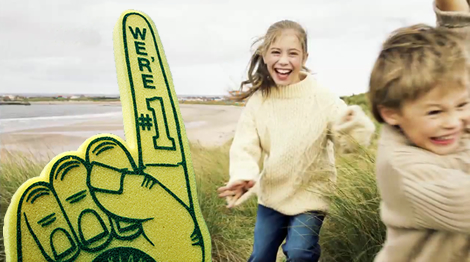 It’s been a tough week for the province… first we find out that the provincial government thinks our beaches and children are too damn ugly to use in advertising, so they have to co-opt some from England. Okay, and yeah, that foam finger is actually one for the Oakland A’s, but what can I say, our foam fingers here in Alberta just don’t stack up… err, I mean, its use was intentional and to give a more global focus… yeah, that’s it.

If stock photography is good enough for the Province of Alberta, dammit, it’s good enough for my blog! And, honestly, as a marketing type, whomever thought up that “It was intentional” defence, should be given a one-way ticket to Northumberland to find new employment.

Then, as Two-third pointed out, Alberta had the biggest decline in retail sales in the nation in February. Add to that Mark Carney lowering the bank rate and telling Canadians to start spending like crazy or he is going to unleash “quantitative easing.”

So yeah, it’s been a tough week… but fear not, the Canadian Bankers Association had news that is sure to erase all those bad memories. They released their February numbers, and Alberta is now leading the nation in mortgages in arrears.

So suck on that Atlantic Canada, we’re the champs now!

As of February 0.48% of all mortgages in Alberta are now three months in arrears or more. Up from 0.45% in January, and 0.22% a year earlier. Alberta has seen something of a meteoric rise in this regard since bottoming out at 0.14% in 2007, at which point we were neck-and-neck with B.C. for lowest rate in the nation.

So what does it all mean… well, if you’re looking for new business opportunities, I’d say repossession is going to be a real growth industry for the next year or two. Arrears are showing no sign of slowing down, and if people are behind on their mortgages, they’re likely behind on all kinds of credit.

A lot of boys will be parted with their toys, so if you’re liquid and in the market for quads, trucks, plasma tv’s, etc… you can probably get a helluva deal.

Not that these are situations necessary to cheer… but that’s reality. For those with cash in hand, recessions can be a great time to acquire assets, business, personal and luxury… unfortunately real estate is still grossly overpriced, give it time though, even that will one day correct, then it’s vulture time!

Sidenote: I’m trying something new with the comments, because the amount of people posting as “anonymous” was out of hand and you never knew whether you were dealing with one person or six. So please enter some kind of handle to identify yourself as if you want to comment.

I’d rather avoid forcing people to register with Blogger or OpenID, but if this doesn’t work that’s what we’ll have to do. So, if you have any comments or questions, fire away.