Hope everyone enjoy their Thanksgiving long weekends, and filled up with turkey and complex carbohydrates.

In the comments section of last weeks post on consumer debt someone referenced these stats on bankruptcies/insolvencies in Canada. I managed to find their historical bankruptcy numbers, but not the proposal and total insolvency stats (insolvencies = bankruptcies + proposals).

So, we’ll take a look at the bankruptcy numbers today, and rather then do one monster post I’ll just do a series and in coming days and weeks I’ll do further comparisons between consumer debt, bankruptcies and foreclosures.

Rather then just quoting the hard figures, most of these measures have been derived to give a better historical context. This is a figure of the number of consumer bankruptcies per 1,000 people in Alberta for any given year. Also included the long term average and median figures for comparative purposes, and a projection of what the 2009 figure will be based on the numbers through August and long-term seasonality.

As we can see, through 2008 we were still in the average range overall, but actually quite low when compared to the prior 20 years (given the shift there must have been some kind of change in measurement and/or legislation around 1990). During the boom period we saw bankruptcy figures fall, but are expected to spike back up this year to pre-boom levels.

It is also interesting to look at the historical figures. For example, we’ve talked here often about the early 80′s recession and have heard the stories about the devastation felt by residential real estate. We can see bankruptcies did double from the boom days in the 70′s to the bust in the early 80′s… but the rate stayed constant right through the rest of the 80′s, no discernible spike as one might expect.

Then in the early 90′s we see the rate climb from 1.0 to 2.25… this also coincided with a recession (though minor compared to a decade earlier), but curiously in the mid 90′s the rate took off again and topped out above 3.5 after the recession had already played itself out.

From what we know about home prices, they had a significant drop in the early 80′s, and minor one in the early 90′s, but were stagnant in the mid-90′s. So, it would seem any relationship between consumer bankruptcies and real estate is probably not closely tied to bankruptcy rate. 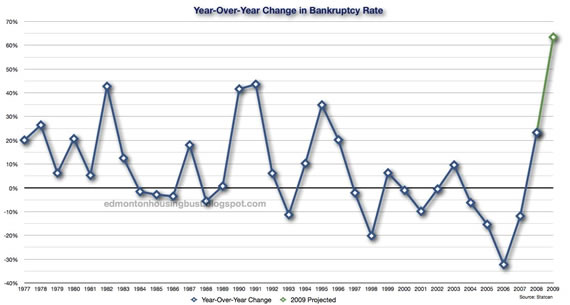 Just some food for thought, here is the year-over-year change in bankruptcy rate. Interesting to note that based on our current pace, 2009 will have the highest increase ever. No small feat considering it was not exactly low going in. While probably not directly effecting real estate, it is a rather damning statistic for the Alberta economy as a whole.

Here we can really see the effects of the early 80′s recession. While the rate was not so high, there was a HUGE difference in the sums of money per bankruptcy, and that’s likely a sign there there were a lot more foreclosures involved… where as it appears in most years the vast majority of bankruptcies involve those that do no own real estate.

When it topped out in 1984 there was an (inflation adjusted) average of about $237,000 worth of liabilities (very close to the inflation adjusted average real estate price at the peak of that boom, coincidence?!), to only about $60,000 worth of assets. The figures at play between 1982 and 1986 completely dwarfs any figures before or since.

Here is another graph that somewhat combines the two prior. It overlays the rate over the average deficiency (I included nominal and real dollars just so you can see for yourselves the effects of inflation).

Here we can see that the sums involved are really not related to the number of people defaulting. Through from 1991-2001 despite the rate being at all time highs, the average person who filed for bankruptcy was less then $10,000 in the hole.

So we can fairly safely conclude that in those years that vast majority of those going bankrupt were not home owners, or in any danger of becoming one, so the rate itself is probably of little value in predicting foreclosure rates.

What is a better indicator of foreclosure trouble is the sums involved.

The 80′s were remembered as disastrous, and the deficiencies witnessed then reflected that. We had a slight hiccup in the early 90′s, and we can see a corresponding blip in 1990. The more people that are foreclosed upon, the higher the numbers will skew.

That we have been tracking upwards the last few years could be a warning of things to come, but as we’ve discussed here, the levels of non-mortgage debt carried have also taken off of late too, so we must take that into the equation.

It will be interesting to see what the numbers end up looking like in 2009, as I could not do any projection for the deficiencies and that is the number we’re most interested in for our purposes.