How I got here 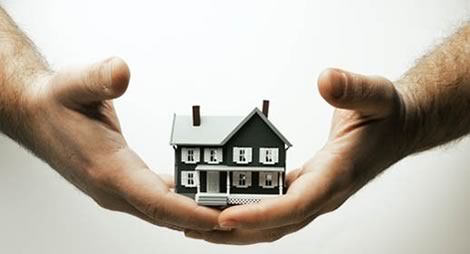 I’m sure literally none of you have wondered to yourselves, “how does one become a contrarian blogger?” Well, it’s not a terribly interesting story, and doesn’t pay nearly as well as telling people what they want to hear, actually, it doesn’t pay period… but as my experience in the last year may be somewhat relatable for some out there, I figured why not answer the question no one asked.

I’ll try to spare you the self-aggrandizing life story as much as possible, but just for a slight background I grew up in a rural area about an hour north of Edmonton. Went to the U of A for a few years, and lived around campus then decided I wanted a change of scenery and major and went out of province for a couple years. So I took the scenic route through school, figuratively and literally.

So, after my wandering through the wilderness for awhile I moved back to Edmonton. It was the summer of 2006, and we were right in the heart of the boom. The housing market was on fire, everything was selling, prices skyrocketing and vacancy rates were practically nil.

I had never been one for peer pressure or conspicuous consumption, so I really had no intention of buying as I had no idea what I really wanted to do with my life at the time (still not entirely sure about that one, truth be told, but I think that makes me more interesting!). I figured I’d just rent for a couple years and see where life took me, then I’d get serious about buying something, as long term it generally does make sense.

So I went out and found a place, a nice 2-bedroom for about $920 a month. I thought it was a little high at the time, so I decided to compare the rent to what it would cost to buy the identical condo’s literally across the street (at one time they were all one big complex, but at some point the one section was split off).

Now, I know a lot of brokers and whatnot like to work a lot of voodoo with downpayments to make anything sound affordable, but you have to figure in an opportunity cost for your money… and the going interest rate is as good as any as far as I’m concerned, so I go in calculating costs at 100% financing. The rest pretty much comes out in the wash and you get a quick and dirty comparison. Truth be told, you should really be able to do a bit better then mortgage rates on your investments, but we’re being conservative.

Suddenly $920 a month didn’t sound so bad. Sounded even better considering three weeks later when I took possession the rates for new tenants had gone up to $1220, apparently I got in just under the wire. And, was banking about $5,000 a year more then I would be owning.

So, I was quite content, and I really only followed the real estate market passively, checking in to see what those condo’s across the street were going for every once in awhile. By summer of 2007 when the market peaked they were asking $230,000 to $240,000. My rent went up to $1070.

Still really didn’t start thinking to much about buying until early 2008. I knew I had another rent increase coming, and had gotten somewhat settled into life. I also remembered my professor lecturing us one day about how home ownership was a good form of forced savings, thought I had been pretty diligent about saving without needing to be forced. I knew long term it generally was advantageous to buy, as assuming constant interest rates your payments will stay the same as rents will continue to increase.

I really had no interest in buying one of those condos across the street, but I continued to follow them just because they were a direct comparable and probably an overall reflection of the entire market price movement wise. By the winter I started to look around online a bit, was also pleasantly surprised to see the asking prices were now in the $220,000 territory.

Come summer 2008 I figured it was time to get serious and got an agent and looked at some places. Prices had come down some more and those condo’s across the street were now asking about $200,000. Knowing the pending rent increase coming, suddenly the cost of buying was a lot closer to the cost of renting. There was still about a $100 premium over what it would cost me to rent (excluding equity), but another rent increase would erase it anyway.

That the price of those had dropped $40,000 in a year probably should have raised a red flag, but I think that was probably overwhelmed by the greed induced by seeing better and better properties dropping into the range that I wanted to spend ($270,000-$300,000). I also kind of accepted the popular mantra that real estate always goes up, and figured it was probably just that the market overheated and it was probably largely adjusted back. So it’s all good.

By saving diligently I had seen my downpayment swell, and bigger and better properties kept dropping into my price range. I grew up in a family where we generally didn’t like to buy things we couldn’t pay for outright, so I’ve always felt debt was to be avoided as much as possible. I’m basically of the opinion that if you can’t pay it off in 20 years at the most you probably shouldn’t buy it, and if you can’t in 25, you definitely shouldn’t. So, obviously I don’t have a terribly high opinion of the 30, 35, and at that time 40 year ams, in fact the longest amortization I’m personally willing to take is 15.

I’m also a bit of a utilitarian. I’d much sooner pay $2 for a $1 item I want, then $1 for a $2 item that I don’t. My car is probably a good example, I wanted a quality car that got good mileage… so I got a Jetta TDI. I could have got another car for much less, but I did a little cost-benefit analysis, these retain their value a lot better, and the diesel engine probably saves me a dollar for every dollar I put in the tank. Other then that it’s about as bare bones as you get. Of course you need get serviced through VW, which is not only bad, but very expensive… but there is no free lunch.

Anyway, so I looked at a bunch of places, and even liked a couple so much so that I was thinking about making an offer. But I wanted to do a little market research before I commited to anything. I stumbled upon the EREB’s historical average price stats, put ‘em in a spreadsheet and graphed them. 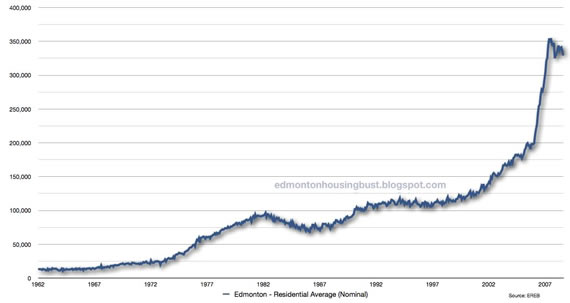 The first two words out of my mouth were “Holy shit!” I then rechecked that everything was inputted correctly, and when I found it was, I can honestly say any house lust I had was long gone. Over about 30 seconds I went from being ready to make an offer, to hugging and whispering reassurances to my wallet. There was something very wrong in Kansas.

I’m no Ph.D, but I’ve studied some math, stats and finance during my day, and that graph alone scared me straight… and I imagine damn near anyone could immediately see something wasn’t right.

So, between my affinity for numbers and a little OCD I went about compiling any and all figures I could find. Running simulations, looking for correlations (it was also during this time that I developed my extreme distaste for the New Listings statistic, that figure is an useless as tits on a bull).

I also started reading the blogs and research papers. Anything and everything basically. The more research I did and measures I’d calculate, the more it became apparent that prices were too high. Then the economic crisis hit in October, and at that point my wallet took it’s turn hugging and whispering reassurances in my ear.

Believe it or not, being as close to buying as I was actually saved me tens of thousands of dollars, as I had pulled most of my investments into cash as an expected downpayment, much of which would otherwise have been lost in the stock crash. So I kind of failed upwards on that one.

That fall the landlord tore up the rental increase, and not too long after it actually ended up being decreased down to $900 a month, I’m now paying less then when I moved in. The posted rate has also dropped down to about $1000, but the complex continues to lose tenants. It’s certainly a different picture then three years ago.

Despite the real estate surge the last couple months, currently the condos across the street are now asking $180,000, one was posted awhile back for $165,000 but it looked like it was in pretty rough shape. The prices on the places I was going to put bids on are down even more, 15% and 20% respectively… so, just sitting on my wallet has already saved me 40-50,000. Even if the local price numbers are similar to last year the asking prices still look to be down, but then again condo’s are expected to be a big albatross on values since they’re so overbuilt.

As per why I decided to start blogging, well, I just didn’t really find many other sites doing the kind of analysis I am, and certainly not on the Edmonton market. Also there didn’t seem to be any counter point to the seemingly infinite supply of blogs with a vested interest in seeing people buy. So I figured maybe someone else might be interested in this stuff, and putting it online kind of forces you to do your homework before opening your yap, so it’s a learning experience.

Today I’m infinitely more prepared to buy a home and know what I’m getting into when that day comes then I was a year ago. Do not confuse my bearish views on the market conditions with on buying real estate in general… in general it’s usually a wise investment… trouble being we’re not in a “general” period, at least in my not so humble opinion.

For those already in the market, the conditions aren’t really a big deal, especially if you’re downsizing or moving laterally. This is because once you’re vested it’s all relative.

But, for first-time buyers, like myself, it’s not a good time to enter. If you overpay to get in, that’s a mistake you’ll be paying for the rest of your days. Even those bullish on the market aren’t predicting any explosive growth in prices any time soon, so there is little to be lost by taking a wait and see approach… but if I’m correct, there is much to be gained by waiting.

I don’t know about you guys, but I’ll take ‘low-risk/high-reward’ any day over the alternative. When I’m spending hundreds of thousands of dollars I want to be damn sure I’m buying an asset that won’t depreciate, short term or long. I don’t concern myself with trying to hit the bottom… I just want to make sure I buy on the right side of it.