The first hits you’ll get will probably be of the Russ Meyer-esque definition… and don’t get me wrong, big fan of that variety, but looking up that sort of thing while others are around can invite trouble from HR, or even worse, the MRS.

I’m talking about market busts, and in this case, housing market busts… and for the most part, these are safe for work.

There is no one universally accepted definition… which is also true for ‘booms’ (or ‘recessions’, or ‘depressions’, as we’ve seen of late), so that’s probably why there is such spirited debate about such things.

I did some googling of my own, and found all sorts of numbers thrown around, but it seemed most were in the 10-15% range peak-to-trough.I ended up stumbling upon a couple pretty good long term studies that I think I’ll go with.

One was from the IMF and published in 2003. It studied 20 busts from 1970-2002 in 14 industrialized nations. It’s findings were that to qualify as a ‘bust’ the peak-to-trough contraction must be at least 14% in real dollars (inflation adjusted).

Also perhaps of interest, on average they lasted about 4 years, and the average correction was 30% (again, in real dollars). There is actually a lot of really interesting findings in there as it compares equity to asset bubbles, and it’s quite prophetic when you compare it to what’s happened in the U.S. of late.

The other study was by the FDIC in the US, and was published in 2005. It studied US markets from 1978-2003 and they concluded that to be a ‘bust’ the peak-to-trough contraction must be at least 15% in nominal dollars.

This may not sound like a big difference from the IMF definition, but the distinction between real and nominal dollars is actually a significant one. Which I’ll display later when I compare our current situation with the bust in the 80′s. Personally I’d lean towards using real dollars, especially over the long term, but there is an argument to be made for the use of nominal dollars, particularly in the short term. 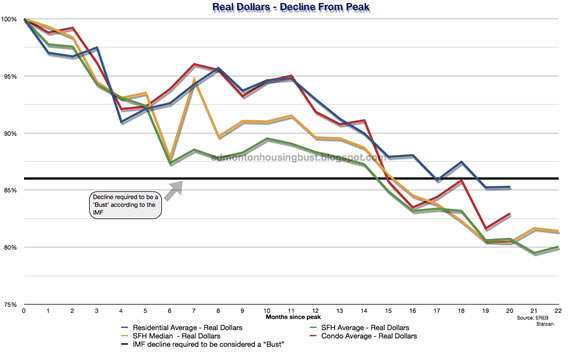 First we’re going to take a look at the IMF definition. Here we see the various price measures here in Edmonton and their percentage declines since peaking respectively when adjusted for inflation.

From this graph we can see that for all measures have satisfied the IMF definition of a ‘bust’ already… so, if you didn’t think the name of my blog was correct, how are them apples! 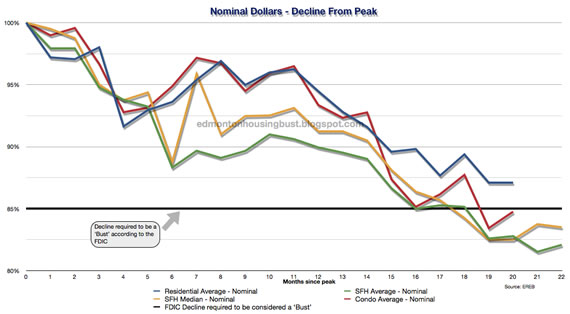 Now the FDIC definition. This graph yields an interesting observation… both condos and single-family homes have surpassed the threshold and are therefore busts… but somehow the overall residential average (which those two make up), has not…. how does that work?

Basically the answer is proportion. When prices were peaking, the ratio of condos/SFH’s selling was much higher for whatever reason *coughspeculationcough*… since then the ratio has dropped, thus, more SFH’s and fewer condos are counting towards the average… and when you have more higher priced units selling and fewer lower priced ones, it’s brings up the overall average.

So, even though the residential average hasn’t passed the threshold just yet, everything that makes up the average actually has. So, by the FDIC measure too, Edmonton qualifies as a bust.

Clears as mud? Good. And we wonder why so many people hate statistics!

Now, as promised, a comparison with the 80′s bust. Since we’re were just talking about nominal prices, we’ll stay there and do them first. To compare apples-to-apples, we’ll stick with talking the residential average as I don’t have the other price breakdowns going back that far.

Here we see the 80′s bust took about four years to go from peak-to-trough, and the total contraction was 29%. We can also see that our current bust is tracking very closely thus far.

Also interesting to note the volatility in the prices. The overall trend is down, but there are a ton of spikes along the way. Evidently there is a lot of bouncing left in a dead cat. So, for those eager to call bottom don’t get too excited… even a couple or three consecutive strong months are not unusual, and can be quickly erased. Bottoms are only revealed long after the point. 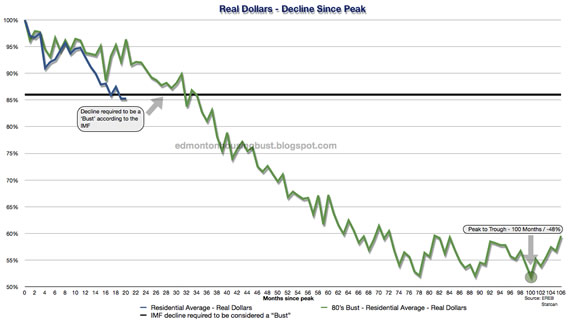 Now the comparison using real prices. As we can see, by this measure the 80′s bust was much longer and much deeper.

Took 100 months before finally hitting bottom, over 8 years (though I suppose one could argue that it effectively hit about two years earlier, the absolute bottom wasn’t struck until month 100), and the total contraction came in at a whopping 48%.

We can also see that our current bust appears to be tracking faster, passing the 14% threshold two years earlier.

An interesting note is that for the 80′s bust, the real peak actually occurred two and a half years before the nominal peak. Real prices had already dropped about 13% before nominal prices peaked. This could happen because at the time there was very high inflation, and also something of an extended plateau in price.

This is in stark contrast to our current peak, where inflation was relatively low and there was no plateau to speak of… thus real and nominal peaks were simultaneous.

In conclusion, it appears that by most measures we are not just heading towards a bust, but have already arrived. And it’s not one of those things that bouncing back above the threshold undoes, once you cross the line, it’s done.

Like virginity in many ways, you can argue about the criteria, like it should be nominal dollars not real… or I was drunk, and it was Mexico… or it should be 14% not 15%…. or it was just the tip, just for a sec, just to see how it feels… but wherever you draw that line, once it’s crossed, it cannot be uncrossed.