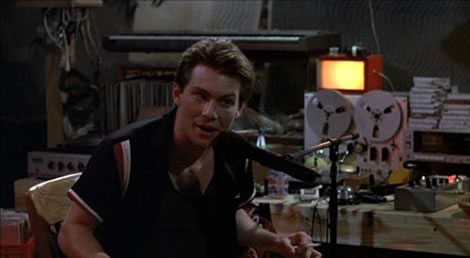 I got my Wild Cherry Diet Pepsi, and I got my Black Jack gum here, and I got that feeling… mmm that familiar feeling that something rank is going down up there. Yeah, I can smell it. I can almost taste it.

Alright, so you can’t really smell snow. Give me a break, I’m working on a theme here!

Anyway, as you may have deduced by that I’d done as many posts in the five days as I had in the prior month, my little month from hell has ended and I now have more time to dedicate to the all important business of blogging.

Today I think we have a really interesting one, not so much directly related to housing, but moreso to the greater socio-economic front… that being, consumer/household debt. 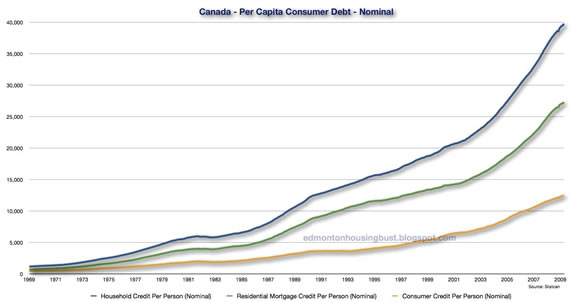 Statcan has some good data sets on such things, here is a link to the one I used. Actually that one is slightly more up-to-date then the set I used, it’s up to October where as the data I used was only up to May… but one was free (thanks in no small part to the university never deactivating my database access even years after convocation), whereas the other costs $43, which would effectively increase this blogs budget infinitely, and would provide essentially no perceptible difference. I digress.

Actually that data only gives you the total debt, I then divided that by the population at any given time (available here), to come to a per capita level of credit which would be more relatable. Could have also done it on a per household basis, but I could only find one data set for that and it only went back to 1997. It would just be a function of per capita anyway though, so it’s all the same.

As I’m sure you noticed, there are three lines. The green one in the middle is mortgage debt, relating to the purchase of residential housing. The yellow line, is consumer debt, things like credit cards, lines of credit, automobile loads, etc. Finally there is the blue line which they call “Household Credit,” which is the sum of mortgage and consumer debt.

The above graph is of nominal values. As those of you who follow the blog knows, nominal values are not terribly useful when talking about long term comparisons, so lets adjust it for inflation. 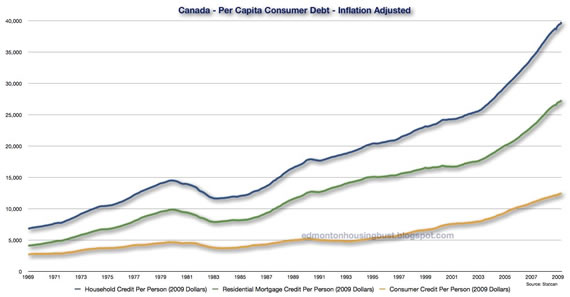 There, that’s better… and a little bit scary. As we’ve discussed before incomes have been fairly flat for the last 30 years when adjusting for inflation, so to see household debt has increased 3x in the last 25 years since the last big boom/bust cycle.

This isn’t all together surprising, as we have also discussed how real estate prices have increased faster then the rate of inflation throughout recent history anyway, and residential mortgage debt makes up the majority of total household debt.

What is more alarming is how consumer debt has taken off, particularly in the last 15 years, where it appears to be growing exponentially. Like mortgage debt, this is no doubt linked to the decline of interest rates over the last 25 years.

The current recession has done nothing to quell Canadians thirst for debt, as they continue to rack it up at a record pace thanks to the rock bottom rates we’ve seen the last six months, even while Americans have pulled back at the same time.

The question now is that rates have for all intents and purposes reached their absolute bottom, they must now go up. The degree to which that will happen is yet to be seen, but once it happens it will contract the levels people are capable of carrying… which would have a devastating effect on not just real estate values, but the economy as a whole. 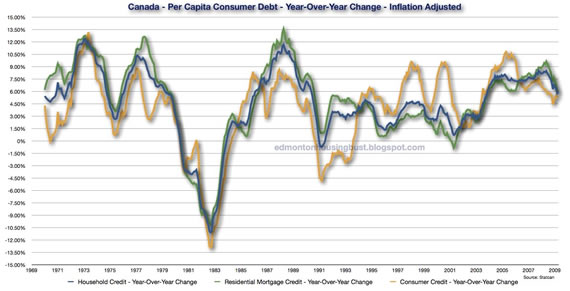 Here is a look at a bit of a different angle of the numbers, this the year-over-year change. Much more volatile, but we can also see, the forms of debt tend to track together. When consumer debt spikes or dives, so does mortgage debt, to different degrees but strikingly similar patterns.

We also know the last big decline in real estate values came in the early 80′s, and we can see the mother of all troughs. Such a decline in not only mortgage debt, but also consumer debt would obviously have a major impact on the economy, and this would seem to be consistent with has been happening in the United States the last couple years after their housing bubble popped.

So, one would expect that if the same were to happen here in Canada, we would see a big contraction in not just mortgage debt, but also consumer debt, which currently stands at record levels and an extended period of relatively high year-over-year growth.

Exactly what is to come is difficult to say, but there is no doubt that if interest rates were to return to historical norms it could spell big trouble considering the level of debt carried by Canadians.

So, until next time, just look inside yourself and you’ll see me waving up at you… naked… wearing only a cock ring.